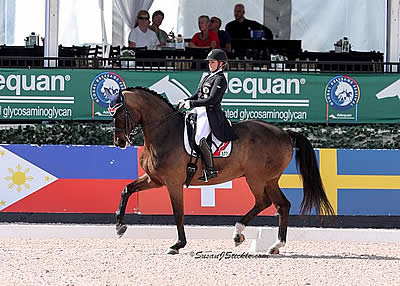 Diana Porsche and Di Sandro, a 2003 Oldenburg gelding (De Niro x Gentina x Sandro) owned by Porsche, rose to the top of the leaderboard in the FEI Grand Prix Freestyle 16-25 CDIU25, presented by Diamante Farms, with a score of 74.875%.

“Di Sandro was really good today; I think we had a lot of highlights in today’s ride,” said Porsche. “It was a difficult freestyle and we are not used to the warm weather, but I am super happy about the points and about the results.”

Porsche and Di Sandro are currently ranked at number one on the FEI Youth Dressage World Ranking List – U25.

Of her goals, Porsche noted, “I would like to finish my season here at AGDF with good results, and I hope to qualify for the European Championships in the U25 tour for Austria. After that, we will see what the future brings!”

Coming in second to Porsche was Mathilde Blais Tetreault (CAN) and Utah, a 2001 KWPN gelding (by Jazz) owned by Tetreault, with a score of 70.850%. Third place was captured byKaitlin Blythe (USA), who rode Don Principe, a 1999 Hanoverian stallion (Donnerhall x SPS Papagena x Prince Thatch xx) owned by Maryanna Haymon, to a 68.925%.

Earlier in the day, Katriana Sadis (USA) and Zeplim, a 2004 Lusitano gelding (Ribamar x Sereia) owned by Sadis, were the champions of the FEI Young Rider Freestyle CDIY, presented by Yeguada de Ymas, earning a score of 71.875%.

“He was surprisingly hot today!” revealed Sadis. “Usually he’s a really cool dude, but luckily I had some time to get him settled in the ring and then he was right there with me for the whole test. We have a really difficult freestyle; my coach Nicholas Fyffe made it for me. We tried to make it more challenging because I don’t have the biggest moving horse, so you really have to ride to get the points.”

Sadis began competing in the main Global Arena at AGDF in 2014, where she moved up the levels from the FEI Pony to the FEI Juniors and then to FEI Young Riders classes.

Regarding her future goals with Zeplim, Sadis commented, “I think I’m going to do Young Riders again this year with him. My end goal with this horse is to get him to the U25 Grand Prix, so I’m going to continue to work towards that.”

Codi Harrison (USA) and Katholts Bossco, a 2007 Danish Warmblood gelding (Blue Hors Don Schufro x Katholts Farceur x Michellino) owned by Harrison, placed second with a 67.725%. Third place was given to Camille Carier Bergeron (CAN) and Expression, a Westfalen gelding owned by Bergeron, with a score of 67.625%.

Competition at AGDF will resume with a full schedule of classes, including CDI-W competition presented by The Axel Johnson Group, and FEI Small Tour classes, presented by Wellington Regional Medical Center, on February 23-26. For more information and to see a full list of results, please visit www.globaldressagefestival.com.