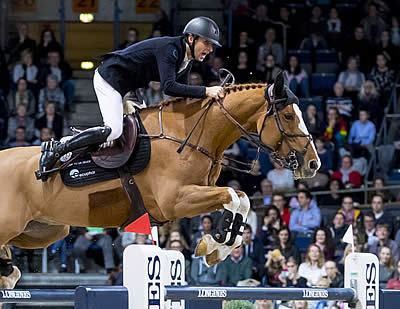 Belgium’s Pieter Devos (32) and Austria’s Max Kuehner (44) put paid to the myth that men don’t multi-task when taking the top two places in the fifth leg of the Longines FEI Jumping World Cup™ 2018/2019 Western European League on a fascinating afternoon in Stuttgart, Germany.

Unlike the majority of their opponents, they both divide their time between top-class showjumping and full-scale commitments in the business world. And they put their business-brains to work in an extraordinary 10-horse jump-off that took everyone by surprise.

“There were some options in the jump-off that were not easy to do, and there were a lot of misunderstandings from the horses so it wasn’t fluid; riders were trying everything they could, but it was not working out well. I decided I would go for a clear round, but I knew I had to keep my head and stay concentrated!” said Devos after pipping Kuehner by almost eight seconds when last to go against the clock with the chestnut gelding Apart.

The big blue wall at fence three had already created plenty of excitement in the first round, with two eliminations and several refusals, but it came as a bit of a shock when jump-off pathfinder, Germany’s Christian Kukuk with Colestus, ground to a halt in front of it this time out. German course designer, Christa Jung, had set them a track full of twists and turns, and both Sweden’s Stephanie Holmen (Flip’s Little Sparrow) and Germany’s Maurice Tebbel (Don Diarado) lost their chances on the sharp roll-back to the second and third elements of the double before Kuehner set off with PSG Final.

The Austrian, who finished a superb sixth individually with his top ride Chardonnay at the FEI World Equestrian Games™ two months ago and who manages a leasing company when not in the saddle, wasn’t taking any risks with his lovely eight-year-old gelding who is showing massive potential. He steered him home for the first double-clear of the competition, although their slow time of 56.62 seconds looked to have left the door wide open for the six yet to go.

However, Germany’s Philipp Weishaupt (Asathir) knocked a brick out of the bogey wall, Belgium’s Olivier Philippaerts (H&M Legend of Love) slipped on the approach to the second-last which hit the floor, and 2012 Olympic champion Steven Guerdat from Switzerland (Alamo) faulted at the second fence. So when Germany’s Christian Ahlmann (Tokyo) decided to take a leisurely tour with his inexperienced horse, posting a clear in 57.68 seconds, then Kuehner was, even to his own obvious amazement, still out in front.

Last in, Devos knew what he had to do. “I could see I could go six or seven seconds quicker but I also knew if I knocked a fence then I would be nowhere anymore. But Apart jumped really well, he already won a lot of classes for me but never anything as big as this, so I’m really happy for him!” said the Belgian after stopping the clock in the winning time of 49.05 seconds.

He talked about the challenge of mixing his business and sporting careers and says it has just become a way of life.

“Everyone asks me how I do it and I don’t have the answer because I ask myself that sometimes too! My brother and I inherited a big fruit company from our parents when I was 17 or 18… it’s a second-generation business and I’m Commercial Director. I’ve grown up doing both jobs, the fruit business and the horse business, and it works because I have a great team on both sides!” — Pieter Devos (BEL)

Devos, now 16th in the world rankings, is lying second on the Western European League table with 39 points and is only a whisper away from qualifying for the Longines Final in Gothenburg (SWE) next April.

“I will go to Madrid (ESP) next week and then Mechelen (BEL) in December. After that I’ll make a plan for the second half of the season, but I don’t need too many more points now which is great!” he added.