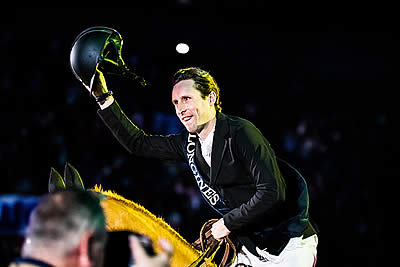 For the second year in a row, Belgium’s Pieter Devos and his 14-year-old gelding, Apart, came out on top at the super-competitive fifth leg of the Longines FEI Jumping World Cup™ 2019/2020 Western European League in Stuttgart, Germany where defending series champion, Switzerland’s Steve Guerdat, had to settle for second ahead of last week’s winner, Great Britain’s Scott Brash, in third.

As always, German course designer Christa Jung didn’t make it easy for the 39 starters in the first round, but the quality of the field ensured an 11-horse jump-off against the clock that had the crowd sitting on the edges of their seats.

“In my opinion this was the toughest leg of the series so far. They always build big here; it’s always technical and tough, but because of the big arena and the very good ground, horses jump well,” Devos said. And he’s delighted that, now lying second on the League table with 40 points already on the board, he looks well set for the Longines Final 2020 in Las Vegas, USA next April. “I’ve done three qualifiers with three different horses, I’m almost there and I’m very happy!” he added.

Ireland’s Richard Howley and Chinook led the way in the jump-off with a fast round in 45.56 seconds but leaving a fence on the floor. Third into the ring, Guerdat, was clear but a little slower when breaking the beam with Venard de Cerisy in 45.87, and Brash challenged that with a strong run with Hello Senator but was a little off the pace when crossing the line in 46.05 seconds.

It was clear Guerdat’s leading time could be beaten when Spain’s Eduardo Alvarez Aznar and Rokfeller de Pleville Bois Margot galloped through the finish in 45.20 seconds, leaving an element of the double on the floor. But as Devos set off, he wasn’t convinced he would be the man to do it, and when Apart lost his footing on the turn after the wall three from home, he reckoned his chance was definitely gone.

“I saw Steve’s ride on the screen and I thought this would not be my day because he was very fast! And then after my slip after the wall I thought I wouldn’t be quick enough, but when I rode over the finish line I was – so I’m very, very happy!” he said after posting what turned out to be the winning time of 45.35.

But the excitement lasted to the very end, with the penultimate partnership of Philip Weishaupt and Che Fantastica producing a breathtaking round that drove the home crowd into a frenzy of excitement. Way up on time coming to the last, the German partnership stormed home in 43.63 seconds, but an awkward jump at the last saw the pole fall for four faults which left them in fifth place at the end of the day, just behind Switzerland’s Pius Schwizer and Cortney Cox whose double-clear in 46.25 slotted them into fourth.

“I need to try to do better and leave the poles up in the jump-off next time!” Weishaupt joked afterwards. “For four or five months I had not so many clear rounds so I really wanted to do it today. Maybe I went a little too wild at the last one and should have given the mare a chance to jump it, but I’m still happy with her; she jumped great!” he said.

Runner-up Guerdat congratulated Devos on his winning performance – “Pieter did a great job!” he said. Talking about his own result, he said, “I’m happy to be second as I did not have the jump-off I expected on the last line. My horse responded too well after the wall and turning back to the skinny oxer, and I planned eight (strides) to the last but I changed my mind and I ended up with 10! There were other riders faster than me but they had an unlucky one down, so I was lucky today to finish second, but I’m very happy with my horse.”

Devos was delighted with Apart. “I think he must like the arena here, and the Stuttgart crowd! He felt amazing here last year and again this year he was super!” he. And he was very pleased when awarded a brand new Mercedes-Benz as his winner’s prize. “My wife needs a new car so she’ll very happy!”

World No. 1 and three-time Longines FEI Jumping World Cup™ champion, Guerdat, still leads the Western European League table going into the sixth of the 14 qualifiers in Madrid (ESP) in two weeks’ time, with Devos in second and Brash in third. The British rider has now accumulated 35 points and, with something in the region of 40 normally sufficient to secure one of the top 18 places that will make the cut to the Final, also looks well on the road to the bright lights of the Las Vegas where the 2020 champion will be crowned.