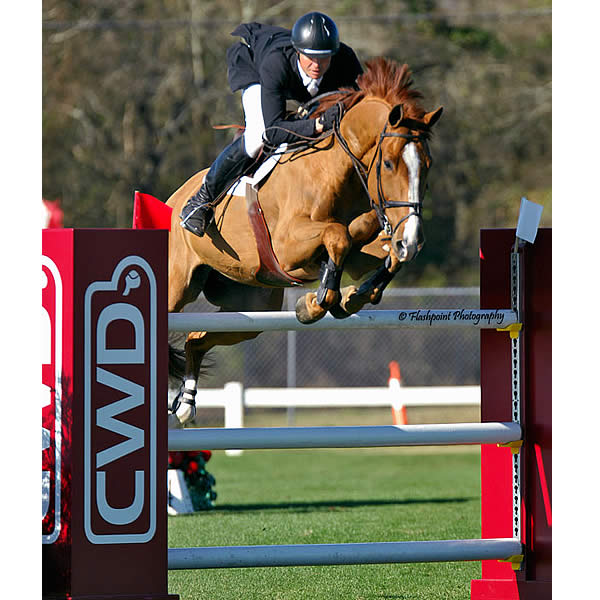 Calissandro is a nine year old American-bred Holsteiner by Conejo purchased as a two year old by Ryan.  Ryan has trained and shown the horse through the Young Jumper program and has developed Calissandro from the ground up.  “I think it is important that the horse trusts his rider, and Calissandro and all of my horses have a great trust of me.  I have done all of their training and showing and that gives them a lot of confidence.”

“The course was very technical,” said Stephens.  “I was hoping for six clean, so I’m happy that I got 5,” he added.  The 9 a and b combination had a liverpool on the back end and saw many dropping rails.  “I jump a lot of liverpools with my horses and use it in their training, so I didn’t have a problem with it,” commented Ryan.

Theo Genn riding Paradox, owned by Thomas Bruinsma, was the first to go clean with a time of 76.534 seconds.  Devin Ryan, aboard Roman Saluut ***, confirmed there would be a jump-off and turned in a clean first round effort in 78.340 seconds. Bryn Sadler of Santa Fe, New Mexico challenged the men and secured her ticket to jump off after turning in the fastest, clean first-round effort with a time of 72.479 seconds aboard Bon Giorno, owned by Showcase 81 LLC. Theo Genn then returned to the field, this time with Bridlebourne Stables LLC’s Winchester, to turn in a clean round of 75.347 seconds.  Ryan was last to go of the twenty four trips and returned with his fourth mount, Calissandro, riding the first round clean in a time of 78.575 seconds.

Genn, aboard Paradox, was first to go in the jump off and had one rail down at the first fence and the last leaving them with 8 faults in a time of 42.199 seconds.  The pair would finish in fifth overall.  Next to go was Ryan, in the irons on his own Roman Saluut***, but with a rail down on the final obstacle, would finish with four faults in a time of 42.926 seconds, placing them in fourth position overall.  Next to go was Sadler and Bon Giorno from New Mexico, who turned in a clear round in a time of 47.371 seconds to the cheers of the crowd.  Genn, rising to the challenge, returned to the ring, this time aboard Bridlebourne Stables LLC’s Winchester.  The pair went fast and clean in a time of 43.728 seconds and looked to take the class until Ryan returned to the ring on his own Calissandro. The pair went clean and beat Genn’s time by more than two seconds with his own 40.591 seconds, securing the win and leaving Genn and Winchester in second place and Sadler and Bon Giorno in third.

The good times are rolling into the Gulfport Winter Classic’s Sunshine Week!  Big classes, bigger prize money and the Groom’s Class sponsored by Reflections & Brick Church Farms, to name a few of the highlights!

Friday’s feature event with be the $10,000 USHJA International Hunter Derby and will take place at 8 am on the beautiful grass grand prix field. The $10,000 Open Jumper Welcome will take over the field in the afternoon and will showcase some of the talent participating in Sunday’s $50,000 Budweiser Grand Prix.  Don’t forget to reserve your table now for the grand finale weekend. At only $275 per table, you can’t beat the food and champagne! Individual tickets are also available, so make sure to book your table now and see Jennifer in the show office.

The Gulf Coast Winter Classic in Gulfport is where the fun has been all winter, and hopefully you haven’t missed it! Mardi Gras in neighboring New Orleans ended a few weeks ago, but its festive atmosphere spilled onto the show grounds. With its close proximity to the Gulf Coast beaches, class offerings, prize money, and social scene, the Gulf Coast Classic Company’s Gulfport shows are a must on everyone’s show list.  The show featured weekly $2,500 USHJA National Hunter Derbies and the $10,000 USHJA International Hunter Derby Week is set to take center stage this week. The weekly grand prix schedule will wrap up Sunday with the $50,000 Budweiser Grand Prix scheduled for March 10.

Equestrian Connect is Classic Company’s Official Service Provider and allows exhibitors to store their data one time, on the web, and then use that data to automatically fill out hunter/jumper entry forms across the country.  The service offers a free 45 day trial period for new members.  At the conclusion of the trial period, Equestrian Connect offers an annual subscription, or a “pay as you go” service. The service allows exhibitors to save both time and money.  This is the one-minute online entry service that will help you get your entries in on time and you to the show!