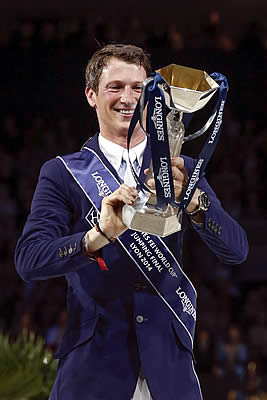 All mine! Germany’s Daniel Deusser looks with delight at the Longines FEI World Cup Jumping trophy which he won today following a superb performance with Cornet d’Amour. Photo: FEI/Dirk Caremans.

Lyon (FRA), 21 April 2014 – Daniel Deusser steered the 11-year-old stallion Cornet d’Amour to victory in today’s Longines FEI World Cup Jumping Final 2013/2014 at Lyon, France, pipping fellow-German and former FEI World Cup champion, Ludger Beerbaum, by a narrow margin. For 32-year-old Deusser it was a real test of nerve after moving into pole position at the end of the first round after Olympic champion, Switzerland’s Steve Guerdat, lost his grip at the head of the leaderboard.

“When I went into the second round I knew I had to be clear and you see could at fence number one – I nearly knocked it straight away! But I got my concentration and tried very hard, although I have to admit I was happy when I was finished!” said new Longines FEI World Cup Jumping champion who has brought the German tally of wins in this series to ten.

Following the withdrawal of joint-leader Patrice Delaveau from France yesterday, Guerdat was heading the leaderboard on a zero score as the competition began. However just six points separated the top nine, leaving no room for error.

Course designer, Frank Rothenberger, tested them in both rounds but the quality of jumping was exceptional. As he said tonight, “The day to me was perfect; we didn’t see big mistakes, just faults on the verticals and the back poles of the oxers.”

Ehning’s spectacular first-round clear ensured he would move up the order as did Brash when doing likewise, but Ahlmann’s chances were dashed by a refusal at the first element of the double at six and a total of 12 faults. Van der Vleuten was penalised for his pace with just a single time fault while Madden’s hopes of retaining her title were undermined by a pole down at the middle element of the triple combination at fence eight.

Beerbaum’s clear was followed by a mistake for Schwizer at the oxer three from home, but when, second-last to go, Deusser’s stallion produced another flawless performance then all the pressure was on Guerdat. And the Olympic champion made it all the way to the penultimate oxer before Nino des Buissonnets got too deep and caught the front pole on take-off. His grip was gone, and he went into round two lying second and on level-pegging with Beerbaum carrying four faults, while Brash was close behind still carrying five. Deusser was now out in front.

Rothenberger’s first-round test had been stiff enough, with the triple combination quickly followed by a double of verticals and a strong pace required to keep inside the 76-seconds time-allowed.

Second time out the time was set at 72 seconds which was also a brisk enough pace over another 13-fence track which began with a tall vertical followed by two big oxers and a left-hand turn to a vertical at four before the triple combination at five. The front element here proved the bogey in this round, the yellow pole falling eight times.

Van der Vleuten was removed from contention here, but both Brash and the 13-year-old mare Ursula and Beerbaum and his 11-year-old mare Chiara left all the timber in place to keep the pressure on the final two. And the crowd gasped when Guerdat’s Olympic gold medal winning gelding fell afoul at the triple combination in an otherwise foot-perfect run.

As Deusser started out last to go you could hear a pin drop, so the noisy rattle of Cornet d’Amour’s hooves hitting the top pole of the first fence led to a big intake of breath around the arena. But as all the top riders all know, luck so often plays its part even at the biggest moments, and when the fence stayed up then Deusser steeled himself for the remainder of the course. There was another touch at the second element of the double at fence nine, and the pair arrived very deep at the following vertical, but this would be Deusser’s day as he cleared the finish line to a wall of applause. His big smile told the full story.

He has been riding Cornet d’Amour since June 2012, and in their first big show together at Spruce Meadows in Canada they jumped double-clear in the Nations Cup.   However, the horse was injured in November of that year and out of action for two months. “In the end the break was maybe good for him because he came back out in February last year to win the Grand Prix at Wellington in Florida. We had a great year in 2013 including finishing fourth in the Grand Prix of Aachen!” said Deusser about his experience with the horse that also claimed the German Championship title at Balve before taking team silver and fifth place individually at the PSI FEI European Jumping Championships in Herning, Denmark last August. Clearly this was a partnership on a mission. Yet the German hadn’t banked on going to the Longines FEI World Cup Jumping Final until winning the Western European leg qualifier at Mechelen in Belgium in December.

“I didn’t ride at Oslo (NOR) or Helsinki (FIN) but I started in Verona (ITA) and had one down in the jump-off. It wasn’t until I won at Mechelen (BEL) that I started to get enough points to come here, although if you told me before I came here that I would win the Final I wouldn’t have believed it! But when you have a good horse you always have a chance,” said the rider who collected his last qualifying points at the World Cup qualifier in Wellington, USA. Cornet d’Amour is jointly owned by Stephan Conter of Stephex Stables in Belgium and America’s Hunter Harrison. Deusser and his girlfriend, Caroline Wauters, live in Mechelen.

Second-placed Beerbaum said tonight he was “really happy; I came here as the very, very, very last rider from the reserve list; it was a rush to get here because I only knew I was coming a week ago. My horses were planned to go outdoors and they came here with no training for indoors so it is hard to believe the way it has worked out. The whole week could not have been better, and well done to Daniel – his performance with his horse the whole way through was incredible. I have no problem to be second to that – well done!”

Third-placed Brash said, “If I knew before I came here that I would finish third I would have been very happy! On the first day I had the last fence down and it really cost me, after that we would struggle to get on the podium so it’s nice to be sitting here today! Ludger and Daniel were fantastic today as usual!”

FEI Jumping Committee Chairman, John Madden, congratulated the riders and show organisers. “This is a fantastic venue and at the end of the day I have a feeling of deep appreciation and gratitude for all the teams that allowed us to enjoy fantastic sport. I’m happy to represent the FEI, and also very much appreciate the people who produced such a fine event, like Longines, who brought the prize money up to the right level for this type of championship – and the riders of course.”

Walter von Kanel, President of Longines, who attended tonight’s post-competition press conference, said, “Longines is committed to equestrian sport, sincerely and long-term. I want to congratulate the FEI, the staff, the riders, and I’m very proud to be sitting next to the Longines World No. 1 Scott Brash! I was pleased to see that the riders put the welfare of their horses first.”

“Lyon is the third city in France, but in terms of equestrian sport I think it is number one! I will go back to Switzerland with great memories of everything I have seen here in Lyon this week,” he concluded.

This was the 10th German victory in the history of the event.

Germany now heads the table for most wins in this series, with the USA in second with nine victories.

Ludger Beerbaum, the first-ever German rider to take the title back in 1993, finished second with Chiara.

World No. 1, Scott Brash, finished third with Ursula and is the first British rider to stand on the prize-winner’s podium since Michael Whitaker (Portofino) at Las Vegas in 2005.

Winner at the inaugural Final was Austria’s Hugo Simon with Gladstone.

27 horse-and-rider partnerships started in today’s last of three legs which decided the 2013/2014 champion.

20 returned for the second round.

7 jumped clear over the first-round course.

The USA had the biggest representation with 7 riders, Germany fielded five while Switzerland, Great Britain and France sent out two riders each.

Frank Rothenberger, course designer – “Congratulations to all the riders. Normally I need to be ahead of the riders to make a good competition; this time the competition was excellent with perfect conditions, including in the warm-up, and the feeling was great with this big arena which was like being in outdoor!”

Sylvie Robert, Event Director – “We had a full house today and I am delighted. Thank you to all our partners, the FEI who entrusted us with these Finals, and a special thanks to Longines. Also thanks to the rider and owners, to Frank (Rothenberger) and to the staff and volunteers.”

Daniel Deusser GER, talking about his horse Cornet d’Amour – “He has a good character, is easy to ride inside or outside and it’s possible to add in or take a stride out with him; he’s careful and that helps him to win a Championship like this!”

Scott Brash GBR – “It is my first World Cup Final and I wasn’t familiar with the points system but it’s basically the same as the European Championships and the most consistent horses and riders win. My horse jumped fantastic all week.”

Daniel Deusser GER – “I have always had a good feeling in Lyon; it is always a fantastic show; everyone wants to come back here.”