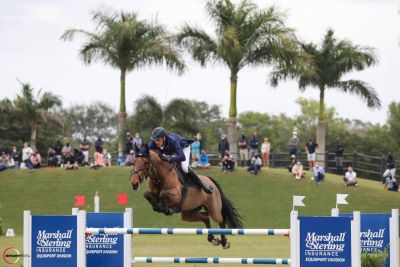 Deusser and Killer Queen VDM, an 11-year-old Belgian Warmblood mare by Eldorado Vd Zeshoek x Derly Chin De Muze, galloped swiftly across the track, leaving all the jumps in their cups. The pair stopped the clock in 39.98 seconds making them the only combination of the day to crack the 40-second mark.

“I’m very happy with Killer Queen today,” said Deusser. “She arrived two weeks ago. I took her to other places to work with her on the grass, and she took it very well this weekend. At the end she is just an unbelievable horse. She has all of the things that a good show jumper needs; she’s very scopey, she’s careful, she has a huge stride, and she can be fast easily.”

Anderson Lima’s (BRA) artistry was put to the test once again with 16 jumping efforts featured in the first round of competition. There were 45 combinations in the starting field with a total of 15 qualifying to jump off over a shortened track that offered opportunities for tight turns and spots for a big gallop across the stunning grass field. The fastest of the day was Polle riding Jet Run (Chacco-Blue x Peisha), finishing in 37.52 seconds.

“I thought the course was pretty challenging, and it was a fair test,” she said of the1.45m track. “I was a little bit surprised there were so many clear actually and a lot of fast riders in the jump-off, so I was definitely a bit nervous. My horse has a lot of ability, and he’s very experienced so even though we’re still a relatively new combination, I have a lot of faith in him, so I felt good going in. I stuck to my plan in the jump-off, but the last line ended up a lot shorter for me than I expected so I was lucky my horse was good there.”