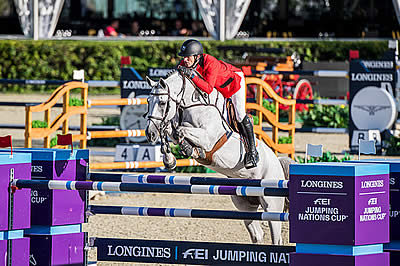 Team Belgium, winners in 2015 and again last year, looked supremely confident when topping the first round of the Longines FEI Jumping Nations Cup™ 2019 Final at the Real Club de Polo in Barcelona, Spain. But the battle between the seven countries fighting for the single qualifying spot on offer for the Tokyo 2020 Olympic Games proved equally as intriguing during an afternoon filled with thrills and surprises.

A total of 18 countries went into battle, but only eight places in Sunday’s second-round decider were up for grabs and it was Belgium, France, Sweden, Colombia, Ireland, Germany, Switzerland, and Italy who claimed them, the hosts missing out by an agonising 0.45 seconds when time was the deciding factor. So instead they go through to the Challenge Cup on Saturday night in which they will be joined by all the other nations who didn’t make the cut – The Netherlands, Norway, USA, Japan, Great Britain, Brazil, Mexico, and Egypt. Team Portugal has withdrawn from the competition.

“We always try very hard and we were looking forward to coming back here again and today we did very well, but there’s still the second round on Sunday which will be more difficult. The teams that have qualified are all strong and they are all very close together. We are lucky that we already have our Olympic qualification so we don’t have that pressure anymore, but we are very happy how we jumped today.” — Peter Weinberg (Team Belgium)

Olivier Philippaerts got Belgium off to a flying start when clear with H&M Extra, and Pieter Devos added just four faults with a mistake at the oxer at fence five, while Jerome Guery’s stallion Quel Homme de Hus was one of many to hit the flimsy plank topping the vertical at fence 10. But when Gregory Wathelet and MJT Nevados, the only horse-and-rider partnership competing this week, who were also on that history-making European gold-medal-winning team last August, were foot-perfect all the way, then Belgium completed on a four-fault tally which left them heading the leaderboard with a single-fault advantage over the French.

Sweden and Colombia shared third place on a total of nine, and the Colombians are once again proving a force to be reckoned with. Although they are not always very visible on the international circuit they have a habit of pulling off some great results at major events, and Carlos Enrique Lopez Lizarazo produced one of just nine clears on a day when 70 riders from 18 teams took on the 13-fence track created by Spanish course designer Santiago Varela.

The Irish have their eyes fully-focused on that Olympic qualifying spot so were highly relieved when their 10-fault tally earned them fifth place ahead of Germany, Switzerland, and Italy who all completed with 12 faults on the board but who were separated by the total of their combined times. It was heartache for Spain’s Alberto Marquez Galobardes, Sergio Alvarez Moya, Santiago Nunez Riva, and Eduardo Alvarez Aznar when they were squeezed out by the Italians who will resume that Olympic qualification contest with the Colombians and Irish when the final-day action gets underway on Sunday with all eight teams starting again on a zero score.

“We came here strong!” said Olivier Philippaerts. “We’ve had a great season, so we wanted to come here with the best team possible and that’s what we did. This was a tremendous start; going into Sunday it’s good for the confidence and now hopefully we can pull it off!” he added.

Chef d’Equipe Weinberg was extra-pleased with the performance of Pieter Devos “because he had Claire (his European gold-medal-winning horse) in New York last weekend so instead he rode this young mare, Jade, here for the first time in a class like that and she jumped brilliant!” he said. And he’s excited that Niels Bruynseels, a member of last year’s victorious side who will replace Devos in his team for Sunday, will bring out another up-and-coming young talent, the 10-year-old Belgian stallion Jenson van’t Meulenhof.

Anchorman Wathelet insisted that he felt under no pressure “because everyone else had done their job and made it easier for me!” but it was in fact his clear round with Nevados that clinched that pole position. He’s a man of great experience. “I was on the team that won in 2015 when I was also double-clear, and two years ago I was also double-clear so I think I like it here!” he said. But like his team manager he is under no illusions about what can happen on Sunday.

“It’s a whole new competition and anything can happen. We know it’s going to be difficult to do the double, but that’s what we came here for – to win!” he said.