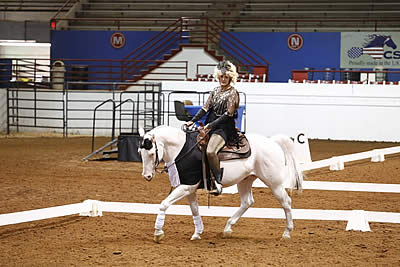 With his pure white coat with just a black “sun visor” for a marking, Smokin White Gun, known as “Danny,” has become one of the best-recognized horses at the Western Dressage World Show.

But Danny is unique for another reason: He is deaf.

Working with a deaf horse does pose some unusual challenges, Joanne says. “He doesn’t spook at things ordinary horses spook at,” she says. At their farm, while the other horses will flee from the lawnmower, Danny will follow it around, hoping for treats.

But he will spook at things that suddenly appear in his field of vision. He hasn’t heard them coming, so they startle him. Joanne says she has learned to be his ears, listening for anything she can hear coming that’s likely to bother him, recognizing when it’s likely to appear for him and then distracting him or keeping him turned away from it.

Where he lives at Bally Vae Farm, near Lincoln University in Pennsylvania, his handlers have all learned that he may have issues with things over his head, or with sudden contrasts between light and dark.

“It has been a learning curve for both of us,” Joanne says.

But for all that, she wouldn’t trade him for the world.

He started life as a reining horse and came to a barn where Joanne was learning reining. Having been born in England and grown up in Austria, she’d ridden a number of horses there, but as soon as she met Danny, she knew he was special.

That was three years ago.

“The minute I sat on him, I thought, ‘This is the horse for me’,” she said. She rode him for about two weeks, under the tutelage of her trainer, Lauren Annett, then bought him.

She started riding him as a reining horse, but after a while, “I think both of us were getting a little bit burned out with that.”

Joanne in particular was having a particularly hectic year. She was working full time, trying to finish work for her Ph.D. in veterinary medicine (her subject of study is analysis of the relationship between osteoarthritis and periodontal disease in horses), working full time, and trying to ride and show, as well.

She ended up moving Danny to Bally Vae Farm, which is much closer to her home, and gradually switched to Western Dressage.

“It has really done him a world of good,” she says, noting how much his gaits have improved. “But I think he chose it more than I did.” He made it clear that this was work he liked, and “he does have a great work ethic.”

But still, she laughs, “I think his dream job would be to be in a petting zoo… he’d love to stand around being petted all day and being given treats.”