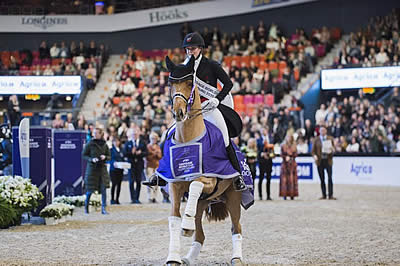 Not for the first time, Denmark’s Cathrine Dufour and her mighty little chestnut gelding Atterupgaards Cassidy stole Swedish hearts when winning the tenth leg of the FEI Dressage World Cup™ 2019/2020 Western European League at the Scandinavium Arena in Gothenburg (SWE).

The Danish pair has a particular affinity with this city, taking bronze here in both the Grand Prix Special and Freestyle at the FEI European Championships staged in 2017 and then returning to win the FEI Dressage World Cup™ qualifier in 2018.  And they were unbeatable once more, despite a shaky start in the Grand Prix in which they had to settle for third place after a nasty stumble in their first extended trot and an error of course at the end of their test.

“I’ve had him 10 years now and he’s really special for me and my family. I think I owe this horse everything – he kind of created my career and I am really truly enjoying every time I ride down the centreline, because he’s 17 years old and you never know what happens. He feels great and is super-sound, but you just have remember to enjoy every single ride!” Dufour said after pinning Germany’s Benjamin Werndl and Frederic Wandres into third.

Sweden’s Paulinda Friberg and Di Lapponia T kicked off the action after the half-time break with a new leading mark of 74.145, but Wandres soared out in front when posting 81.465 with Duke of Britain for a test that oozed power and pizzazz. Their coordination with their musical score was superb.

“We used this music for the first time at London Olympia at Christmas and it was good; today is only the second time we do it, and when the crowd started clapping on the last line I knew it was not too bad again!” said the rider who finished his performance with extravagant one-handed passage to the delight of the spectators.

Great Britain’s Charlotte Fry and Dark Legend, who posted a personal-best when claiming runner-up spot in the Grand Prix, also produced some fabulous passage on their way to a mark of 81.030, but then Dufour blew the whole competition wide open. Cassidy sparkled as they collected 9s for extended trot and 10s for canter pirouette, and when 87.860 went up on the board that was always going to be tough to beat.

The penultimate partnership of Sandra Dahlin and Ichi have been making the headlines all week because this is a horse that comes with a fascinating story. The Dahlin family won Ichi’s mother in a raffle at Gothenburg Horse Show 17 years ago, and the 14-year-old mare has done them proud. As Show Director, Tomas Torgersen, said, some new riders who have been given an opportunity to compete at Gothenburg Horse Show this year and they have blossomed. Dahlin is one of those, showing tremendous talent when steering her mare into fifth place in only the fourth international outing of their career together.

Last man in was Benjamin Werndl, and the crowd watched intently as he consistently racked up strong scores with Daily Mirror, but when 86.170 went up on the board he had to settle for second place behind Dufour. He was far from disappointed; in fact he said he was “super happy” because this week he has made a breakthrough in piaffe which has sometimes been problematic with this horse. “I’m looking forward to the next competitions now. I always said he’s the best horse I ever sat on; the only thing was the piaffe could be better, but if he does it like he did today, then who knows what can happen!”

With just one more Western European League qualifier left to run, in ’s-Hertogenbosch (NED) in three weeks’ time, many of the riders are thinking ahead to the FEI Dressage World Cup™ Final in Las Vegas (USA) in April. Dufour explained that she won’t compete there as she is aiming both Cassidy and her younger horse Bohemian, who topped the opening leg of the WEL series on home ground in Herning (DEN) last October, at the Tokyo 2020 Olympic Games.

But both runner-up Werndl and third-placed Wandres have it clearly in their sights – if they get the opportunity. “I’d like to go to both Vegas and Tokyo! I have two horses so I will have to discuss with our national trainers. If I go to Vegas I will go with Famoso,” Werndl said.

But as Wandres explained it’s not just as easy as that. As it stands, German riders hold the top four places on the WEL leaderboard of which just two will be permitted to join their compatriot and defending champion, Isabell Werth, in the battle for the 2020 title. Top of the table ahead of the 11th and last leg is Jessica von Bredow Werndl, followed by her brother Benjamin Werndl, then Wandres, and in fourth is Helen Langehanenberg.

“I’m proud to be German but sometimes it’s not so easy in the dressage ring to be a German rider because there’s always a big fight for the three spots for the World Cup Final. And there’s one more show in March so everything is still open and we have to fight until the end. But if I have a chance to go for sure I will take it because it’s a dream for me, especially with this horse. We came into the Grand Prix sport together and this would be something special!” — Frederic Wandres (GER)