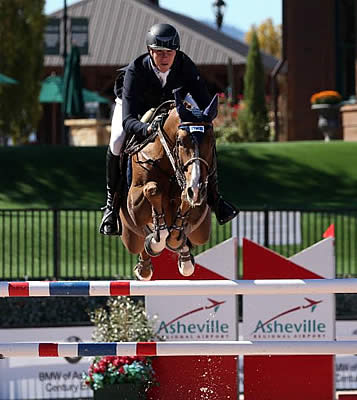 Mill Spring, NC – October 12, 2016 – David Will (GER) and Cento Du Rouet earned a major victory in the $35,000 Horseware® Ireland 1.45m Opener CSI 3* at Tryon International Equestrian Center (TIEC), taking their first career win at the venue. Will and Cento Du Rouet crossed through the timers in 63.12 seconds for first place ahead of Shane Sweetnam (IRL) and Cornwall who collected second place honors with a time of 63.86 seconds. Will piloted his second mount, Monodie H, to third place after narrowly edging the pursuing field with a time of 64.47 seconds.

Will and Cento Du Rouet, owned by Centin Gungor, took advantage of the opportunity to familiarize themselves with the George H. Morris Arena. Will first guided Monodie H, owned by Dietmar Gugler, around the course set by Michel Vaillancourt (CAN) and felt he better understood the direct routes to take on Cento Du Rouet, which would ultimately secure the pair’s victory.

“With Monodie I took a couple of long ways and I wanted to turn tight with her but not gallop too much. She still went very well, enough to get third,” he said. “I’m very happy with her. With Cento, I wanted to try a little bit more and the course really got better towards the end. He did very well and the win gives me confidence for the rest of the week.”

Will is looking forward to competing in the remainder of FEI classes during Tryon Fall IV and will return with both mounts next week to contest the second FEI CSI 5* of the season at the venue. Off to a strong start, he hopes to continue his success from the first day of competition throughout the rest of the week with both horses.

“I will keep showing both Monodie and Cento in the FEI classes. Both horses will go tomorrow in the Suncast® class and then hopefully I will get to ride both in the bigger class on Saturday,” he said. “This is a really nice place for the horses and it’s very impressive. We’re very excited to be here.”

The partnership with Cento has been fruitful for Will, who took over the ride on the 2007 Oldenburg Springpferd gelding (Chintan x Balou Du Rouet) in early spring. The pair has amassed seven top ten finishes together at the FEI level in Europe so far this year and seems fit for top competition over the course of the next two weeks at TIEC.

“Cento is a real fighter. He always wants to work. He really enjoys it and hates it when he has to stay in the stall. He is always very excited to go in the ring and do his job well,” added Will.