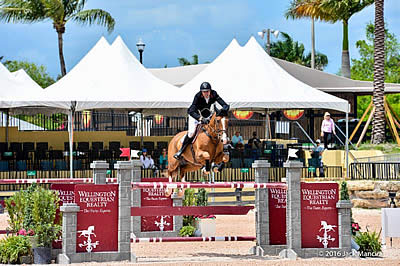 Wellington, FL – April 18, 2016 – David Blake of Wellington, FL and Binkie, owned by Pine Hollow Farm, finished atop the leaderboard in the $30,000 Noble Outfitters Grand Prix at Palm Beach International Equestrian Center (PBIEC), finishing the jump-off in 40.653 seconds. Andrew Ramsay of San Francisco, CA and Winn Winn collected second place, crossing through the timers just four-hundredths off the winning pace with a time of 40.699 seconds. Benjamin Meredith of Wellington, FL and Anabelle 28 earned third place finishing in 42.273 seconds. Competition at PBIEC resumes Wednesday, April 20, with the start of ESP Spring III, which will conclude on Sunday, April 24.

The class boasted 44 starters who tested the first round track set by Ken Krome (USA), with sixteen entries moving forward to the jump-off round. Only the top three finishing combinations earned a double clear effort on afternoon, while Blake and Binkie collected their first grand prix win of the 2016 season.

Blake and Binkie, a 2006 Dutch Warmblood gelding (Larino x Whisper B), finished a stellar 2015 season, capturing numerous wins at Tryon International Equestrian Center (TIEC) throughout their summer and fall campaign. The duo used a softer schedule during the winter circuit to prepare Binkie for another strong summer season.

“We’re using this spring season to get him up and running a bit more. The big aim for him will be this summer in Tryon again. He was very good there and hopefully we can have a repeat performance,” said Blake. “We’ll be riding there the whole summer and I’m looking forward it. He enjoys it there and always seems to do very well.”

The duo’s set order in the jump-off proved to be a crucial component of their success, as they were the final combination to test the short course. Blake noted that Binkie’s large stride helped to cut time in several areas where leaving a stride out would be beneficial.

“When I walked it, I thought the first round seemed very nice and there were a lot of good lines. I had to make sure that I kept him moving throughout though because of the time allowed,” he explained. “I stuck to the plan and he went very well. There were a lot of clears and I knew that there would be some pressure in the jump-off.”

After analyzing in the jump-off track, Blake felt that with his position in the order, he could either ride conservatively for a respectable finish or push for the win. He stated, “Normally, I would have to take a different approach to the jump-off with him, especially when there’s a good number of people in it, but we got lucky with a good draw today. There were two choices: either play it safe and finish somewhere around fourth place, or go for it with the win. There were a few stretches of good gallop in the course and it suited him very well.”

Blake and the Pine Hollow Farm team will head back to TIEC at the conclusion of the fall circuit, and Blake is looking forward competing a string of talented young horses coming up behind Binkie.

“We have three really nice horses that are about to move up to the FEI level and a new horse who we’re hoping will be able to back Binkie up nicely with the ranking classes this summer. It’s a great learning experience for them and Binkie will have a great supporting cast behind him looking towards the bigger events,” elaborated Blake.

Alex Granato of Wellington, FL continued a strong weekend of competition, earning the win in the $5,000 1.35m Classic aboard Criss Cross, owned by Lorena O’Neill and Top Line Farm, LLC, with a time of 37.33. Benjamin Meredith finished in second aboard Karlotta Scott, owned by Sarah Ryan, with a time of 37.46 seconds, while David Blake and Park Lane rounded out the top three, finishing the jump-off in 39.87 seconds.

The $1,500 NAL Child/Adult Jumper Classic was won by Francesca Damasceno of Palm Beach Gardens, FL aboard her own Watermill Time with a time of 36.416 seconds. Kamille Marcussen of Coraville, IA and her own Bull Run’s Pistol Pete finished in 36.587 seconds for second place. Phoebe Alwine of Delray Beach, FL and her own Zenja collected third place with a time of 36.807.

Michelle Navarro-Grau of Wellington, FL and Tazman picked up division champion awards in the Low Junior/Amateur Owner Jumper division for their performance throughout the week, while Isabel Sanchez of West Palm Beach, FL and Euro, owned by Pursuit Farms LLC, collected reserve honors alongside Taylor Land of Alpharetta, GA and her own Dulricke Utica.

Molly Sewell of Winter Park, FL and MTM Caruso S, owned by Brynn Hanson, finished the week with a the win in the $5,000 USHJA Hunter Classic, earning an overall score of 170.5 from the judging panel. Michael Zukerman of Huntington, NY piloted Denmark, owned by Patricia Adikes-Hill, to second place with a 164.5, while Katie Schell of Cleveland, OH and Candor, owned by Redfield Farm, took third place honors with a score of 159.

Sewell earned an 83.5 in the first road aboard MTM Caruso S, and followed in the second round with an 87, to secure the win. Fifteen entries vied for top honors. Sewell also rode E. L. Raymond, owned by Leslie Campbell, to a sixth place finish.

Coco Fath of Fairfield, CT and Akinda rode to the top of the $1,000 3’6″ Junior/Amateur Owner Hunter Classic presented by Sweet Oak Farm. Adam Edgar of Leesburg, VA and Candescence, owned by Clare Sargent, finished in second, while Madelyn Porter and Dragonfly’s Encore, owned by Dragonfly Farms, finished in third.

Competition at PBIEC resumes Wednesday, April 20, with the start of ESP Spring III, which will feature $10,000 Open Stakes Class presented by Accuhorsemat on Thursday, April 21, and the $30,000 PonyUp Horse Treats Grand Prix on Sunday, April 24. For more information on PBIEC and to see a full list of weekly results, please visit www.pbiec.com.