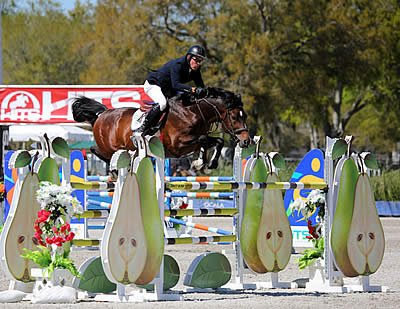 David Beisel has been quite successful in Grand Prix this season at HITS Ocala, including two wins so far $25,000 SmartPak Grand Prix, making this week’s victory his third of 2017. Beisel rode Ammeretto, owned by Equine Holdings LLC., to the win in a 12-horse jump-off, where seven would go clear in contingency for the blue.

Beisel would take hold of lead going eighth in the order over the shortened course designed by Anderson Lima of Sao Paulo, Brazil. Beisel also garnered the fourth place ribbon with Call Me Hannes, owned by Harlow investment Enterprises, LLC.

First to claim a clear round in the jump-off was Emanuel Andrade riding Bon Jovi. They clocked in with a fault-free 35.898-second round right out of the gate, and their round would eventually settle them in third place. Andrade would also claim second place in the class aboard Reus De La Nutria with a thrilling ride as the second-to-last in the order.

The next clear round came third in the order with Hyde Moffatt of Canada and Granturo, owned by Western Sales & Development. They valiantly chased Andrade’s temporary lead, stopping the clock in 39.892, which would ultimately settle them into fifth place.

A few rounds would pass before another fault-free trip was delivered by Kelley Robinson, also of Canada, entered with Blue’s Yer Daddy seventh in the order. They snagged a clear round, but their time of 40.349 could not edge out the rest of the pack, putting them in seventh.

Following Robinson were the victors David Beisel and Ammeretto. They stormed through the course, taking each fence with force. The crowd cheered as they passed the timers in a cool, clear 34.755, a full second ahead of the leading time, where the lead would remain.

Melissa Rudershausen followed with Charmeur Ask for another clear round, and their time of 40.239 put them ahead of Robinson for the ultimate sixth place position.

There were only two left in the starting order, but only one chance to take the win away from Beisel, as he had one more horse left to show.

It was all down to the battle of the quickest between Andrade and Beisel. Andrade went first with his second mount of the jump-off, Reus De La Nutria. They came in hot, stopping the clock in 35.607 to step into second place.

The win was Beisel’s, but he still had one more ride. He followed with Call Me Hannes, putting in a clear round, but their time of 37.213 was not enough to overtake Andrade’s second and third place trips, settling them into fourth place for the white ribbon.