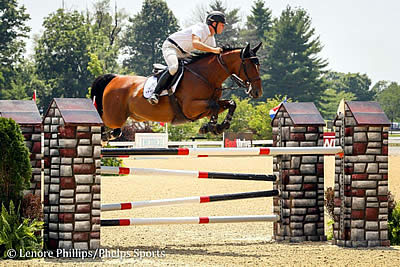 Lexington, KY. – July 26, 2017 – On the opening day of the Kentucky Summer Horse Show, the Rolex Stadium played host to four show jumping classes that offered combinations the opportunity to warm up for an upcoming week of competition. David Beisel of Cincinnati, Ohio and Sharn Wordley of New Zealand both achieved blue ribbons and set themselves up for a successful week of showing at the Kentucky Horse Park.

Beisel and Colato Sabata were the fastest of seven entries in the 7-Year-Old Developing Jumper class, presented by Spy Coast Farm. The chestnut gelding navigated the first portion of the power and speed class with no faults, allowing him to move on to the speed phase, where he was also clear in a time of 33.094. In addition to Colato Sabata, Beisel rode two other entries in the class, which made for an exciting hour as he quickly dismounted one horse just to mount another that was being held for him at the ingate.

New Kentucky resident, Sharn Wordley, also found success in the Rolex Stadium on Wednesday afternoon in the $5,000 Open Jumper 1.40m Speed class, besting a field of thirteen other competitors with his gelding Famoso D Ive Z. The pair completed the course, designed by Oscar Soberon, in a time of 62.934, a full three seconds faster than the next fastest competitor.

On the opening day of the Kentucky Summer Horse Show at the Kentucky Horse Park, top hunter competitors were eager to head into the Stonelea Ring to kick off competition. On Wednesday morning, Tim Goguen aboard Belhaven Stables LLC’s Perhaps led the way in the Green 3’6″/3’9″ Hunter division after placing second in the first over fences round, winning the second over fences round and placing third in the under saddle.

Goguen rode the talented gelding to a handful of championship titles at the Winter Equestrian Festival earlier in the season and he has mainly competed in the Pre-Greens. Robert Crandall and On the Slye are following behind in the division standings after winning the first over fences round and earning a red ribbon in the second round.

In the High Performance Conformation Hunter division, Kathryn Haley of Colts Neck, New Jersey won both over fences classes on Outshine, a 9-year-old Warmblood gelding owned by Alexandra Worthington. The pair placed second in the under saddle behind Jeff Gogul and Cortese.