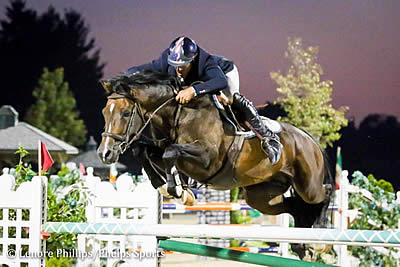 Lexington, Ky. – July 30, 2017 – David Beisel and Ammeretto led a ten horse jump-off to race home with the first place finish in the $50,000 Rood and Riddle Grand Prix. In front of a packed crowd in the Rolex Stadium, Beisel capped off a week of top finishes at Kentucky Summer Horse Show by also winning the Leading Rider Award presented by Envisian Products, LLC.  Amaretto narrowly beat Australia’s Scott Keach on Fedor, with Beisel piloting the mount to a quick time of 39.230 seconds. Taking third place honors was Nicole Shahinian-Simpson on her mare Akuna Mattata.

Ammeretto, who is owned by Equine Holdings, LLC, has been with Beisel since he was a 3-year-old. The now 12-year-old Dutch Warmblood stallion has had a very competitive summer with top place grand prix finishes at the Great Lakes Equestrian Festival as well as the Tryon International Equestrian Center before coming to Kentucky. Beisel credits having the stallion his entire career for their unique ability to make quick adjustments while on course. It was one of those quick adjustments on the long gallop to the Rood & Riddle oxer that helped Beisel overtake Australian Olympic athlete Keach who had taken the lead in the jump-off round from Shahinian-Simpson with a time of 41.296 seconds.

With a lineup of 29 top equestrians, the $50,000 Rood & Riddle Grand Prix was the perfect event to entertain the crowds who had amassed at the Kentucky Horse Park to enjoy ‘Hats Off Day.’ This annual event is held to pay homage to the equestrian industry which holds a very special place in the Bluegrass state. During the day-long event, visitors were able to enter the Horse Park free of charge and enjoy family friendly events throughout the park.

The breezy and cool temperature on Saturday morning at the Kentucky Horse Park was the perfect weather to add spark to Mackenzie’s Inside Scoop, and her second horse, MTM Do Right, who won the division’s reserve championship. MTM Do Right placed second in one over fences class, placed third in two over fences classes and placed third in the handy.

Mackenzie purchased both geldings when they were pre-greens from Mike McCormick and Tracy Fenney. She works with McCormick and Fenney when she is home in Texas, but spends her winter competing at HITS Thermal before heading to Kentucky where she spends the summer.