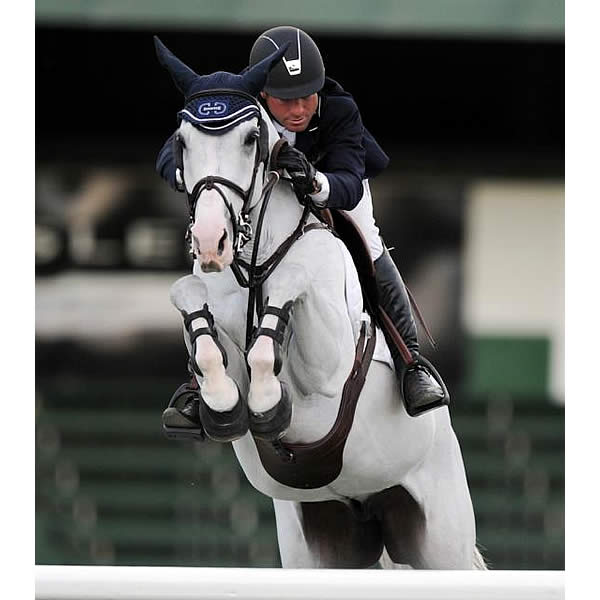 Calgary, AB – June 6, 2013 – The $35,000 Spectra Energy Cup 1.60m was the highlight of today’s schedule at the Spruce Meadows ‘National’ Tournament. Darragh Kerins (IRL) and E Muze Yek found the key to a clear round and were fastest in the jump-off for Kerins’ first victory in the International Ring. McLain Ward won for the second day in a row, this time on Zander in the $33,000 ATCO Pipelines Cup 1.45m. Another first-time International ring win came for Lauren Tisbo and Roundthorn Madios in the $33,000 Prairie Mines & Royalty Cup 1.50m.

The $35,000 Spectra Energy Cup 1.60m had 28 entries that contested a course set by Werner Deeg of Germany. Nine were clear through to the jump-off. The winning time of 40.165 seconds was set early in the jump-off by Kerins and E Muze Yek, a nine-year-old Belgian Warmblood gelding by For Pleasure x Carthago owned by Kerins and Maarten Huygens. They went second in the jump-off and no one was able to catch their speedy time and keep the jumps up.

Kerins was “delighted” with the way his horse jumped, and with his progress over the past five months. They started out in the 1.40m classes in Florida this winter, although Kerins has ridden E Muze Yek off and on for over a year. Coming to Spruce Meadows and going into the International Ring, Kerins “didn’t know what to expect.” He described, “He can be a bit sensitive and this ring can be daunting. He’s maturing very quick. I didn’t think he’d be this far a couple months ago. I couldn’t be happier with where he’s at right now.”

While he has notched several second place finishes, this was Kerins’ first victory in the International Ring. “The first couple of years I came, it beat me up pretty bad. To come back this year and win was great,” he expressed.

Second place went to Ashlee Bond (USA) and Wistful, owned by Little Valley Farm. They were clear in 40.959 seconds. Ian Millar (CAN) and Team Works’ Star Power were third with no faults in 41.023 seconds.

Bond noted that this was Wistful’s “third or fourth 1.60m class ever.” She said, “We bought her as a seven-year-old. She’s still very green and I’m trying to give her good experiences and not take too much out of her. I’m elated and so proud of her. It’s a huge accomplishment for her to do that tonight.”

Ian Millar was pleased with his partner of four years, but is also looking at the long-term plans of the next World Equestrian Games/Pan American Games/Olympic Games cycle. “They’re long-term partners,” he said, “so it gets very personal with horses and ourselves.”

All three riders praised the new turf footing in the International Ring. Millar pointed out, “To get new ground to maturity in about eight months is a huge accomplishment. It’s another first for Spruce Meadows. No other venue in the world has ever put in ground that has come in line this quickly, that’s been this good.”

McLain Ward is starting off his Spruce Meadows Summer Tournament in his usual fashion: winning. After a win yesterday with Super Trooper de Ness, he led the victory gallop again today in the $33,000 ATCO Pipelines Cup 1.45m with his own Zander, a nine-year-old Dutch Warmblood gelding by Cantos x Saygon, owned by Ward and Grant Road Partners LLC. There were 65 entries in the competition, and 20 advanced to the jump-off.

Ward and Zander went into the shortened course chasing a fast time of 35.46 seconds set by Kent Farrington (USA) and Zafira, owned by Haity McNerney, who went first in the jump-off. Ward and Zander boldly left out a stride in the first line, and along with one stride less in the line to the double combination, they cut down the winning time to 34.84 seconds. Third place went to Conor Swail (IRL) and Martha Louise, owned by Susan and Ariel Grange, who finished in 36.54 seconds.

Ward recapped, “I didn’t see Kent go, but I heard about it. I know him pretty well and we have a great, competitive friendship. I knew the only place was to do one less stride from (fences) one to two. It was a little dodgy, but this horse has a huge stride and I figured it was worth the risk. I had planned it before I went. I saw a few horses getting stuffed in the seven (strides). He does have a massive stride and he’s quite brave off a long spot. There was a moment in the line when I wasn’t sure I was getting there, but he was a good boy.”

Ward described Zander as a “confident and a really humble horse.” He added, “He wants to do a good job. Sometimes he’s a little babyish, but he’s really learning. I’ve tried to be really careful with him, but I’ve believed in him from the beginning. I try to move him up when I really think he’s ready to do that. This is the next step of his education.”

The $33,000 Prairie Mines & Royalty LTD Cup was held in a winning round format. From the original 38 entries, the top 16 came back for a second round. From there, the top eight returned again over a shortened jump-off course. The only horse and rider combination to go through all three rounds without fault was Lauren Tisbo (USA) on Roundthorn Madios, an 11-year-old Irish Sporthorse gelding by Condios x Clover Hill owned by Tequestrian Farms LLC.

In the third round for speed, Tisbo and Roundthorn Madios finished with the fastest time of 45.22 seconds. Second place went to Katie Dinan (USA) and Nougat du Vallet (46.13 seconds), owned by Grand Road Partners LLC, while Conor Swail (IRL) and Susan Grange’s Game Ready were third in 46.98 seconds.

Tisbo felt that it was a big chance to take an inside turn in a rollback to a vertical, but that it is what helped her get the win today. “I think only one or two other people did it. Candice King, who is helping me here this week, said, ‘If you land and you see it, go to it.’ So I guess I got lucky! It just worked out,” she said.

Tisbo and Roundthorn Madios have been paired since November; the horse was brought along by Irish rider Andrew Bourns and competed in the BMO Nations Cup at the Spruce Meadows ‘Masters’ Tournament. “He brought him along beautifully and already gave him his debut in the International Ring, so I knew I had nothing to worry about,” Tisbo said of their first time together at Spruce Meadows.

This was Tisbo’s first win in the International Ring. “I don’t think it’s quite set in yet,” she expressed. “Ever since you first come here, you see the classes in this ring and you think you want to show in them one day. Then you’re showing in them and you think, ‘I want to win one day.’ And it finally was my day.”

What Can You Do at Spruce Meadows?

Spruce Meadows includes affordable fun for the whole family. With admission starting at only $5 per person, and children (12 & under) and seniors (65 & up) free, it is the perfect venue to unwind and enjoy a day of show jumping, activities, delicious food, and shopping.

From Friday through Sunday, there will be a number of activities for the whole family (all included in your admission to Spruce Meadows) such as Pony Rides, presented by Kozy Shack, the Spruce Meadows Prairie Dogs, presented by RE/MAX, Wagon Rides, Face Painting, children’s games in the Garden Court Restaurant and more! Delicious food is offered throughout the grounds, featuring a healthy menu at the Garden Court Restaurant, a wide range of options at the Time Faults Public House, and International Fare in the Plaza.

Looking to test your luck? Spruce Meadows has several contest options for those wanting to win excellent prizes, including the Jump to It contest, with a chance to win a full set of jumps, the CN/Sun Media Name the Foal contest, and the Win a Year contest, with a chance to win a year of access to all Spruce Meadows events. If you are looking for some retail therapy, vendors in the Gallery on the Green and Vendor Village offer an excellent variety of gifts and services, both equine and non-equine in nature.