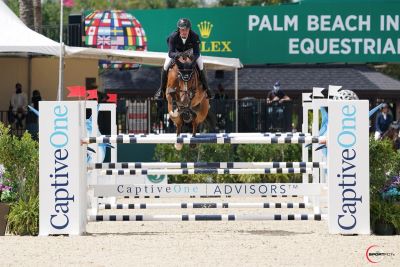 A total of 43 horse-and-rider combinations contested the opening round over a course set by Olaf Petersen Jr. (GER), with just six pairs qualifying for the jump-off. The first to return was Canada’s Nicole Walker aboard Excellent B, a 12-year-old Dutch Warmblood gelding by Berlin x Heartbreaker, executing the shortened track with ease to set the pace for the remainder of the field. Walker and the NW Stables LP entry finished fault-free in a time of 37.81 seconds, which would hold up for second place.

Next to challenge, David Oberkircher (USA) and Upper, owned by Southfields Farm, LLC, gave it their best effort but stopped the clock just off the mark as he and the 13-year-old Selle Français gelding by Diamant de Semilly x Nadir de San Patrignano crossed the finish line in 38.59 seconds for third place.

Forty-five combinations took their final turn around the Global International Arena at Equestrian Village of the season on Sunday morning as they contested the $50,000 CabanaCoast Grand Prix CSI2*. Last to go in the jump-off, it was Ireland’s Stephen Moore aboard Vlock Show Stables’ Team De Coquerie that took the lead in a time of 40.81 seconds over a course designed by Mauricio Garcia (PUR).

“We’ve been building up for a few weeks for this class,” explained Moore. “This is his second two-star grand prix of the season; we started slowly. He jumped good in the qualifier and had one down that kept us out of the jump-off. In the first round today, we got lucky in a few spots and had a few rubs, but he’s always so fast. In the jump-off we were last to go, and I knew the ones that were ahead of me were quite quick, but he’s so fast and turns well so I just had to let him do his thing and hope that his food speed would be fast enough.”

The 2007 Selle Français gelding by Heartbreaker x Girl De Coquerie has been a part of the Vlock Show Stables’ program for about four years, and Moore has had the ride on and off throughout that period of time.