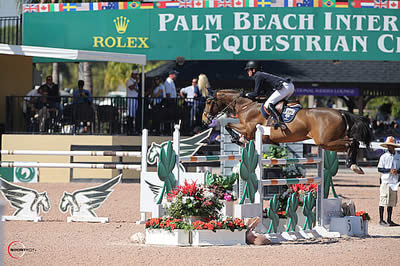 In the International Arena on the main show grounds, Darragh Kenny (IRL) took the top two spots in Friday’s $34,000 Spy Coast Farm 1.45m speed class aboard Oakland Ventures LLC’s Picolo and Toffolon Partners LLC’s Gatsby. The $25,000 Artisan Farms Under 25 Grand Prix Team Event, presented by the McNerney Family, was held in the International Ring at The Stadium at PBIEC with a win for the team of Kaely Tomeu, Brett Burlington, Lacey Gilbertson and Tom Foley.

The $50,000 Wellington Eventing Showcase, presented by Asheville Regional Airport, will finish with their final two phases on Saturday, January 31. The cross-country begins at 1:30 pm on The Stadium derby field. The special showcase will feature some of eventing’s top horses and riders competing for phenomenal prize money in the winter equestrian capital of the world.

Both of tomorrow’s phases of the $50,000 Wellington Eventing Showcase, presented by Asheville Regional Airport, and Saturday night’s $372,000 FEI World Cup™ Grand Prix CSI-W 5*, presented by Fidelity Investments®, will be live streamed at www.COTH.com.

Guilherme Jorge (BRA) set the track for Friday’s 1.45m with 51 competitors and 23 clear rounds. Tiffany Foster (CAN) and Artisan Farms LLC’s Melody des Hayettes Z set the leading pace at 60.31 seconds to eventually finish sixth. Alvaro de Miranda (BRA) upped the time in 59.49 seconds with his own and Victory Equestrian Sport BV’s AD Amigo B, but was later pushed to fifth place. Darragh Kenny jumped into the lead with Gatsby in a time of 57.87 seconds, but soon topped himself to put Gatsby in second. Jessica Springsteen (USA) followed with a clear round in 58.20 seconds to take third place honors riding Stone Hill Farm’s Davendy S. The only person who could beat Darragh Kenny was Kenny himself as the rider topped his own time in the winning round with Picolo in 57.13 seconds. Conor Swail (IRL) jumped into fourth place in the end in 59.26 seconds aboard Vanessa Mannix’s Grand Cru vd Jijf Eiken.

“I just said to somebody that for these classes with those two horses, it is difficult not to be in the top six,” Kenny said of Picolo and Gatsby after his top-two finish. “They are two incredible horses. They are so careful, they are really fast, and you can do whatever you want with them.”

Kenny’s winning mount, Picolo, is a 12-year-old Selle Francais gelding by Diamant de Semilly x Alme. With Kenny in the irons, Picolo jumped to an impressive eight FEI victories in 2014 alone. The horse had a four-month break and started back last week with a couple of 1.40m classes. He stepped right up to the 1.45m this week and never missed a beat.

“Honestly, this horse is just amazing. Every time I ride him he is unbelievable. I have never, ever had a horse like this,” Kenny proclaimed. “He just wants to win so much, and he tries so hard. He is so competitive, and he is just an incredible horse.”

“Ali usually shows him, and she is coming in two weeks. I thought I’d show him this week just to give him a round, and it is just easy,” Kenny stated. “Their styles are a little bit different. I know Picolo so well. I know Gatsby quite well, but not as well. I went fast with Gatsby. I did four strides along one line, and I think Conor (Swail) was the only other person that did four there. Gatsby has such a big stride, so that is where you can be faster with him.”

“I saw Jessie (Springsteen) go and she was really fast and really good and that made me a little bit nervous,” Kenny admitted of his hold on the lead. “Then Eric (Lamaze) was really fast. He was actually faster than Gatsby, so I was a little more nervous. When I went with Picolo, I just wanted to make sure that I went as fast as I could possibly be. He is just incredible when you go against the clock. He is so easy. You just gallop at the jumps, and you never really worry that he is going to knock them down.”

Now that Picolo is off to a great start for his 2015 season, Kenny plans to move the horse up to some bigger classes.

“I am just starting to build him up,” the rider explained. “This is his second week back showing. He will probably jump the 1.50m this week. My goal is to jump him on the Nations Cup team here in week eight. Then he might jump one of the under the lights grand prixs after that. He has just been such a great horse. You can do whatever you want with him, so it is great to have him.”

Gatsby will continue to show in the High Amateur-Owner Jumpers with Toffolon, and they also have plans to compete in the Artisan Farms Under 25 Grand Prix Series throughout the circuit.

Competition in the $25,000 Artisan Farms Under 25 Team Event was tight to the very end Friday evening with the final placings being determined by a two-horse jump-off. Under the lights of The Stadium at Palm Beach International Equestrian Center, Kaely Tomeu led her team of Sweet Oak Farm riders to victory in a head-to-head duel against Eugenio Garza.

Two teams jumped clear in the first two rounds of competition, but only Tomeu kept the streak alive riding to her third clear trip of the night aboard Fidalgo van het Leliehof and delivering a win to fellow teammates Brett Burlington, Lacey Gilbertson and Tom Foley.

The Team Event is one phase of 2015 Artisan Farms Under 25 Grand Prix Series, presented by the Dutta Corp. in association with Guido Klatte which will offer $170,000 in prize money in seven featured events throughout the Winter Equestrian Festival.

In total, 16 teams competed in two rounds over a 12-effort course designed by Richard Jeffery (GBR). Jeffery will also set the track for the stadium jumping phase of the $50,000 Wellington Eventing Showcase, presented by Asheville Regional Airport highlighting Week 4 of the WEF on Saturday. After the evening’s first round, each team dropped their lowest score before advancing. In the second round, 15 teams returned in order of highest to lowest total faults. The winner was determined by the lowest total score after two rounds and a tie-breaking jump-off.

Garza’s four jump-off faults with Bariano – his only in the class – settled his team of Spencer Smith, Shawn Casady and Michael Murphy in second place. Smith with IV Ever and Casady on Twister jumped to a pair of double-clear efforts, while Murphy ended on 12 faults from two rounds.

Making Chef d’Equipe Shane Sweetnam and fellow trainer Michael DelFiandra proud, 19-year-old Tomeu jumped the final round of the night with a win hanging in the balance. “It was a lot of pressure, but it made me do better knowing that other people were counting on me,” she said. “It was going to be exciting no matter how I did because we would have had good results being second, but it was great going clear and winning.”

Fellow Sweet Oak Farm riders Gilbertson aboard Record De Pleville and Foley on Petrushka III ended on zero faults. Burlington and Anders Wictor L had a single rail in each round.

While not the oldest on the team, Tomeu brought the most Under 25 Grand Prix Series experience. After competing in 2012 and 2013, Tomeu didn’t chalk the win up to being a veteran, but rather gave credit to 10-year-old Belgian Warmblood gelding Fidalgo van het Leliehof.

“This horse is amazing,” she said of the mount Sweetnam found for her in June. “I actually didn’t ride my best in the jump-off, but he pulled through for me. I landed off that last jump, realized we had won and knew it was all him that did it. I ride him in the High Amateur Jumpers and he really takes me around – he knows his job.”

Camaraderie from the barn aisle spilled over into the show ring during competition, according to 21-year-old Gilbertson. “Obviously we always want each other to do well because we ride in same barn, but it was special to be able to ride together on a team,” she said.

“We don’t get to do this very often,” added 15-year-old Burlington. “Showing in this stadium ring under the lights on a team was a fun experience.”

Riding last in the second round, 18-year-old Foley kept his team’s hopes for a win alive going clear and guaranteeing a jump-off. “It was good to go last – the pressure makes you try a little bit harder. My horse fought to the end for me,” he said of the 10-year-old KWPN mare he piloted. “It was more the horse than me to be honest.”

This morning in the Rost Arena, 58 junior riders came to compete in the WIHS Equitation Hunter Phase. After three hours of competition, T. J. O’Mara’s score of 90 was unbeatable, and O’Mara earned top honors in section A. Madison Goetzmann finished in second with a score of 88.5 and Katherine Bundy rounded out the top three with a score of 87 in section A.

O’Mara, from Rumson, NJ, was partnered with his own horse, Kaskade, today for the winning ride. Kaskade came to O’Mara two years ago having been a hunter, but O’Mara and his trainers at Beacon Hill thought Kaskade could be a good fit in the equitation. “We saw how much potential she [Kaskade] had, and we decided she would be an amazing equitation horse,” O’Mara explained.

While O’Mara and Kaskade started off the day on a high note winning the WIHS Hunter Phase, they also went on to win the WIHS Jumper Phase section A with a score of 91. With top scores in both phases, O’Mara was awarded the overall first place prize.

After today’s win, O’Mara is qualified for the George Morris Excellence in Equitation class and is excited to compete in it during WEF 11. Looking past the WEF circuit, O’Mara has set his sights on continuing to win equitation classes throughout the summer, as well as have a successful equitation finals season this fall.

Equitation continues tomorrow with the THIS Children’s Medal 15-17 in ring 8. For full results and more information, please visit www.pbiec.com.