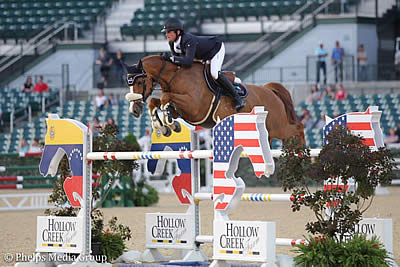 Lexington, Ky. – May 12, 2018 – The evening awards ceremony of the Kentucky Spring Horse Show closed in a familiar fashion as the sun set on a victorious Darragh Kenny (IRL) who led the victory gallop around the Rolex Stadium aboard Babalou 41. On Saturday night, the pair claimed an exciting win in the $131,000 Hollow Creek Farm Grand Prix CSI3*, just after capturing Thursday’s $35,000 Hagyard Lexington Classic CSI3* at the Kentucky Horse Park.

With a starting list of 36 horse-and-rider combinations, Alan Wade’s (IRL) technical 17-effort track only produced four clear rounds for a thrilling and competitive jump-off. Todd Minikus (USA) and Quality Girl also returned to Saturday night competition in top form, delivering the long-awaited first clear round to the delight of the audience. Minikus and the 15-year-old Oldenburg mare, owned by the Quality Group, returned first in the jump-off to set the pace with a blazing time of 36.050 seconds, but were just overtaken by Kenny in the end. However, Minikus and Quality Girl still managed another top award, finishing in second place and adding to Wednesday’s $35,000 Welcome Speed 1.45m CSI3* victory.

Eugenio Garza (MEX) and El Milagro’s Armani SL Z were the ones to guarantee a jump-off in round one as they produced the second clear effort of the evening. Garza and the 10-year-old Zangersheide gelding returned for a clean and careful jump-off in 40.160 seconds to earn the third place award. The team is no stranger to the winner’s circle at the Kentucky Spring Horse Show series upon claiming last year’s $35,000 Hagyard Lexington Classic CSI3* at the 2017 Kentucky Spring Classic.

Once again though, it was Kenny and Jack Snyder’s Babalou 41 who claimed the fastest double-clear finish of the night, flying to a time of 35.500 seconds for the victory. Kenny and the 13-year-old Oldenburg mare are already on the fast track to success with notable FEI wins in this week’s Kentucky Spring Horse Show as well as top placings at the 2018 Winter Equestrian Festival.

The Amateur-Owner divisions wrapped up in the Stonelea Ring on Saturday with the Grand Amateur-Owner Hunter Champion being awarded to the rider who acquired the most points over the course of competition on Friday and Saturday. The divisions saw a high number of entries, but despite the tough competition, it was Stephanie Danhakl and Enough Said who captured the top award at the Kentucky Spring Horse Show.

Danhakl and Enough Said have been a team for five years and their experience showed during Friday and Saturday’s competition. The pair accumulated scores in the high eighties during Friday’s Amateur-Owner 3’3″ Hunter division and they remained consistent in Saturday’s competition as well. During the first round of the division the pair were the only competitors to receive a score in the nineties, which put them in a good position to claim the Grand Amateur-Owner Hunter Champion title.