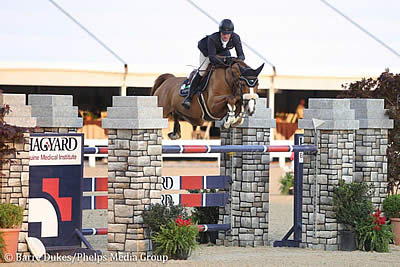 Lexington, Ky. – May 10, 2018 – The Rolex Stadium welcomed its first evening event of the Kentucky Spring Horse Shows with the opener of the seven-part Hagyard Challenge Series, the $35,000 Hagyard Lexington Classic CSI3*, sponsored by Hagyard Equine Medical Institute. Out of a substantial starting list of 53 horse-and-rider combinations, it was Darragh Kenny (IRL) who emerged triumphant, riding Jack Snyder’s Babalou 41 to the fastest double-clear finish in 44.22 seconds.

Designer Alan Wade (IRL) challenged contenders over 16 efforts with a tight time-allowed of 79 seconds and spectators were not given a clear round until one fourth of the way in when Fabio Leivas Da Costa (BRA) entered the ring aboard the 11-year-old Selle Français mare, Tosca De L’esques, owned by Bonne Chance Farm LLC.

Hardin Towell, Darragh Kenny, Kevin Babington, Charlie Jayne, Lorcan Gallagher and Leslie Howard followed respectively with additional clear rounds to yield a thrilling 7-horse jump-off. Returning first in the second round, Leivas Da Costa set the pace with a swift, clear round in 44.44 seconds, but it was just two-tenths of a second shy of the winning time and the pair took home the second place award.

Gallagher and the Dacantos Group’s Hunters Conlypso II also put in two clear jumping rounds, but Kenny could not be caught as the duo ended on a time of 45.81 seconds. The Irish still added another name to the leaderboard as Gallagher was quick enough to capture third place aboard the 10-year-old Hanoverian gelding.

Kenny and the 13-year-old Oldenburg mare share a new partnership as they have only been a team for less than three months, but already show promise following tonight’s success building off of a win in their first 1.50m class together, the $50,000 Hollow Creek Farm 1.50m National Grand Prix at the Winter Equestrian Festival in March.

Hunter competition resumed in the Stonelea ring earlier in the day with the Grand Hunter Champion title being presented to the rider who accumulated the highest scores throughout competition on Wednesday and Thursday at the Kentucky Horse Park. Despite numerous veteran hunter riders putting in their best efforts, it was Scott Stewart and Dr. Betsee Parker’s Harvard Hall who claimed the Grand Hunter Champion prize.

Stewart and Harvard Hall captured the award by acquiring the most points from competing, and earning champion, in the Green Conformation Hunters. On Wednesday, the pair claimed first place in both over fences classes with scores of 87 and 81 in addition to first place in the under saddle portion of competition. They continued to dominate Thursday’s Green Conformation Hunters with scores in the 80s. Stewart and the 7-year-old KWPN gelding, Harvard Hall, have proven themselves to be a great team, having won numerous champion titles during the 2018 Winter Equestrian Festival (WEF) in Wellington, Florida. Harvard Hall was purchased by Dr. Betsee Parker in the beginning of the 2018 WEF circuit.

The Grand Hunter Champion award is presented each year by Visse Wedell. Wedell has been a continuous great supporter of the Kentucky Horse Shows by sponsoring grand championship prizes in multiple divisions every year.