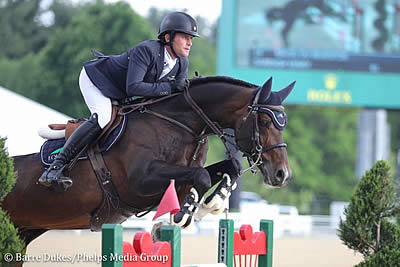 Lexington, Ky. – May 19, 2018 – Saturday of the Kentucky Spring Classic closed with the week’s highlight event, the $131,000 Mary Rena Murphy Grand Prix CSI3*, honoring the late Mary Rena Murphy. Forty-one horse-and-rider combinations were tested over Guilherme Jorge’s (BRA) 16-effort course which saw 11 athletes finish clear to move into the jump-off round, but once again Ireland’s Darragh Kenny was unstoppable to claim the Saturday night victory under the lights on the second week of the Kentucky Spring Horse Show series, this time with brand new mount, Balou du Reventon.

Kenny and Ann Thompson’s Balou du Reventon just started showing together two weeks ago, but they are on an impressive streak after finishing second in Thursday’s $35,000 Hagyard Lexington Classic CSI3* and jumping to a number of clear rounds during their new partnership in Kentucky. Saturday night amplified their success as they flew to a clear round in 41.54 seconds to capture the featured grand prix victory. The 12-year-old Oldenburg stallion is already showing promise as an option for Kenny in this year’s World Equestrian Games.

Early pathfinder Margie Engle (USA) was the first to produce a clear round with long-time partner Royce, and first to return for the jump-off round. She and Gladewinds Partners, LLC’s 14-year-old Oldenburg stallion put on the pressure with a clear round in a time of 42.08 seconds, but their time was just overtaken by Kenny and the pair finished in second place.

Rowan Willis (AUS) and his own Blue Movie, an 11-year-old Anglo European Warmblood mare, followed with a clear jump-off round in a time of 42.55 seconds, speeding to a third place finish. The pair recently traveled to the United States in February to capture a notable victory in the $265,000 Longines Grand Prix CSI5* at HITS Ocala.

The Mary Rena Murphy Grand Prix is held every year in honor of the late Mary Rena Murphy, an important part of American horse show history. Murphy was known for helping many top hunter and jumper professionals begin their careers, in addition to being a successful horse show organizer. She began her career in her hometown of Lexington, Kentucky. She is most known for promoting the Kentucky Horse Park and helping shape the park into what it so well-known for today, world class hunter and jumper shows that not only cater to world class competition, but also to all levels of the equestrian sport.

The Kentucky Spring Classic’s junior riders braved Saturday morning’s rainy weather to compete in the Large Junior Hunter divisions, which are divided by age into the 16-17 and 15 and under. After two over fences classes in the 16-17 division, it was Emma Wujek who took the lead with Carento after placing first and third. Directly after, the 15 and under juniors took to the ring to see Augusta Iwasaki top the lead by placing first and second in the over fences rounds with Small Occasion.

Wujek and Carento just began their partnership together last week, while showing at the Kentucky Spring Horse Show. Their compatibility showed in the ring after producing two solid over fences rounds which placed them as the top contenders for Sunday’s champion ribbon. Carento showed successfully throughout the duration of the Winter Equestrian Festival with owner Erika Luter. Wujek also placed second and fourth with her other mount, Puppet.

Iwasaki is no stranger to the winner’s circle at just 14 years old, with big wins at USEF Pony Finals in 2017 and USHJA National Hunter Derbies. Her partnership with Small Occasion began during the summer of 2017 and the pair plan to continue to show in the Large Junior Hunters, with high hopes of capturing the championship ribbon. Iwasaki is also entered in the division with another mount, Small Anecdote, where they placed second and third in Saturday’s over fences classes.