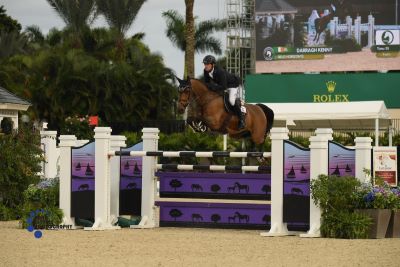 Wellington, FL – December 7, 2020 – The week’s hunter/jumper competition reached its pinnacle on Sunday during the ESP Year End Awards Show at the Palm Beach International Equestrian Center (PBIEC) when 50 challengers vied for the top honors in the $25,000 Year End National Grand Prix, presented by #1 Education Place. Turning in the best performance of the day, Darragh Kenny (IRL) and Oakland Ventures LLC’s Belo Horizonte concluded the show as the leaders of the victory gallop in the weekend grand prix, their second prize money win of the show.

“This is a horse I got from Ashlee Bond at the end of the Winter Equestrian Festival earlier this year,” commented Kenny of Belo Horizonte, a 2008 Holsteiner gelding by Baloubet Du Rouet x Clearway. “It’s been a super horse for me, very careful and fast. I really like it and it’s a really good horse. He doesn’t have a massive stride, but he is very quick across the ground, so I just used that to my advantage today.”

Course designer Anthony D’Ambrosio (USA) crafted a pattern of 16 efforts up to 1.50m in height for exhibitors in the $25,000 Year End National Grand Prix, presented by #1 Education Place. Of the 50 entries in the first round, a slimmer field of seven returned for the jump-off. Juan Manuel Gallego (COL) and Havana De La Lande led the way as the pathfinders as the third in the order, and they were soon joined by Nicholas Dello Joio (USA), Kent Farrington (USA), Kenny, and Jessica Springsteen (USA). At the very end of the start list, Margie Engle (USA) and Spencer Smith (USA) turned in the final fault-free rounds to add two more to the list of clear contenders.

Trimmed to eight fences, the jump-off course was finished successfully by each of the returning pairs, so it all came down to time. The always-speedy Farrington was sitting as the frontrunner on his own Orafina in a time of 37.79 seconds, but Kenny and Belo Horizonte eclipsed the leading pair by fractions of a second as they broke the beam in 37.55 seconds to capture the lead with three duos to go. In the end, Kenny’s and Belo Horizonte’s time would hold as the victors, and Farrington would retain second place on Orafina (For Fashion x Cantu). The final challengers, Smith and Ransome Rombauer’s Lord Up (Lordanos x Come On) grabbed third position in a time of 38.64 seconds.

“It’s great that we can keep this show going and that everybody is following the rules,” remarked Kenny of competing back in Wellington. “This is the best thing for our sport, so it’s very important that we all follow the rules and can keep showing. I’m looking forward to the 2021 season.”

Earlier in the week, Kenny rode to success with a first-place finish and third-place result in the $10,000 1.40m Open Stake, presented by #1 Education Place. The class featured 37 entries on Friday over D’Ambrosio’s track, 15 of which advanced to the jump-off. Up against a fault-free leading time of 32.98 seconds from Alberto Michan (ISR) and Marie Antonette Leviste’s Loribri, Kenny piloted Belo Horizonte as the final contenders to the quickest time of the class, crossing the wire clear in 32.81 seconds to claim victory. Michan and Loribri maintained second place, and Kenny bookended the podium with his ride on Go Easy De Muze, owned by Oakland Ventures LLC, in a foot-perfect time of 34.61 seconds.