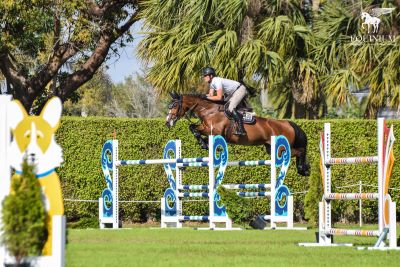 Wellington, FL (February 15, 2021) – Three weeks, three Grand Prix classes, three victories: Ireland’s Darragh Kenny delivered a 1.40m hat trick on Friday, February 12, by winning his 3rd consecutive $15,000 1.40m Turf Tour Grand Prix during Turf Tour 6, held at To-Kalon Farm. The weekly show and Grand Prix series regularly attracts some of the world’s top riders as well as driven amateurs, but for the past 3 weeks Kenny has trounced every combination pitted against him. Headed into Turf Tour 6, to be held February 17-19 at the gorgeous Black Watch Farm, Kenny will defend his triple consecutive Grand Prix title as well as that of winner of the $5,000 1.30m Rising Star Classic, which he won on Wednesday.

Consistently fast and flawless, Kenny’s ride with SHL Farm’s Quatinka was fiercely contested by a number of top riders including Eve Jobs, Ryan Genn, and Heather Caristo-Williams, but to no avail. Kenny’s third to last effort aboard Quatinka answered Ryan Genn’s leading jump-off time of 35.515 with a time of 33.555, nearly a full 2 seconds quicker. Genn, aboard Shannon Reid’s Dieta, was bumped into second with former class leader Heather Caristo-Williams and Marie VD Vespel Z with a jump-off time of 36.286.

“This was my first time jumping here. I’ve brought clients in the past, and we achieved all of our training goals,” said Caristo-Williams of her performance with Marie, a mare owned by Holly Caristo. “She put in a really fast double clear effort, which was my ideal result. It’s really unique to be able to show when you want and to jump on the grass.” The gray mare, who was whinnying her excitement between her first round clear and the jump-off, also sported flashy bling in her braids.