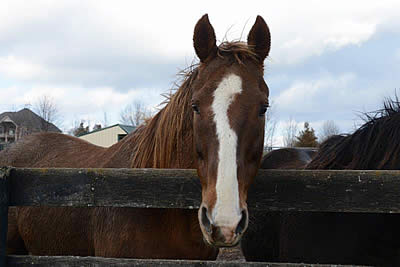 GEORGETOWN, KY – MARCH 20, 2019 – Danthebluegrassman, a 2002 Kentucky Derby contender, was euthanized Monday, March 19, at Park Equine Hospital in Woodford due to an irreparable small intestinal obstruction that was causing chronic colic.

The 20-year-old gelding had been pensioned at Old Friends, the Thoroughbred retirement center in Georgetown, KY, since 2008.

As a 2-year-old, the flashy chestnut won the Gold Rush Stakes in wire-to-wire fashion. A year later, he punched his ticket to the Kentucky Derby trail with a win in the Grade 3 Golden Gate Derby and a close 2nd in the Grade 3 El Camino Real Derby.

A long shot nevertheless, on Derby day he was installed at 50-1 morning line odds, but then later scratched after he “tied up” following a routine gallop at Churchill Downs. In June of that year he went on to another victory in the Northern Dancer Stakes at Churchill Downs.

“Dan was the man — tough but gentle,” said Old Friends President Michael Blowen. “We were fortunate to know him for more than a decade, and he will be missed by all of us. Special thanks to Dr. Bryan Waldrige and everyone at Park Equine for doing the best for Dan when he needed it most.”