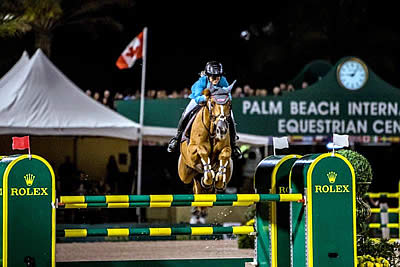 Wellington, FL — February 24, 2018 — In the second five-star grand prix of the season, Danielle Goldstein (ISR) was victorious riding Lizziemary in the $384,000 Rolex Grand Prix at the 2018 Winter Equestrian Festival (WEF) at the Palm Beach International Equestrian Center in Wellington, FL.

There were 39 entries in the Saturday night grand prix, and six found the key to a clear round to advance to the Anthony D’Ambrosio-designed jump-off. First in was Liubov Kochetova (RUS) on her own Veneno, a ten-year-old Oldenburg gelding by Chacco Blue x Balou du Rouet. They took their time to produce a clear round in 45.77 seconds, which would hold up for second place.

Goldstein and Lizziemary, a 12-year-old AES mare by Cabri d’Elle x Acord II owned by The Golden Group and Danielle Goldstein, contested two horses later and put down a blazing time of 35.92 seconds, but even more importantly, the only other clear round in the jump-off.

Going last in the jump-off, Olympic gold medalist McLain Ward (USA) and HH Azur, owned by Double H Farm, were on pace to win, but a front rail at the final Rolex oxer relegated them to third place in 36.60 seconds.

The Lugano Diamonds Amateur-Owner Hunter 18-35 3’6” division had 18 competitors in the Rost Arena on Saturday morning before the championship presentation. Jef Lauwers secured the tricolor ribbon aboard his mount, Screenshot, and dominated the division with a first, first, first, and fourth over fences with a sixth in the under saddle.