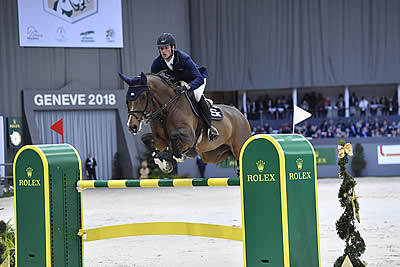 The first qualifier for the Rolex Grand Prix saw nine horse and rider combinations compete in a hotly contested jump-off. Setting the bar high, Daniel Deusser riding Calisto Blue was the first to produce a clear round with a thrilling time of 37.31 seconds.

Last to go, Pieter Davos, looked on par to emulate Deusser’s clear round but was a fraction too slow and had to settle for second place, with Simon Delestre finishing in third, both excellent contenders for the Rolex Grand Prix on Sunday.

How did the course feel?

Daniel Deusser: The time was really tight in the first round so everybody was forced to ride forwards, and in the end the horses got quite long which accumulated a lot of faults. There were 10 combinations clear and a couple more with time faults, which is a good amount for a jump-off, but it was certainly not an easy class.

Going into the jump-off did you think you were in with a good chance?

Daniel Deusser: To be honest, I was not sure. There were a lot of fast combinations to compete against and I thought that one or two might be a little bit quicker, but I think my clear round put the pressure on and some of the horses were forced to go quicker which made them go a bit flat. I had a good round and was really pleased with my horse.

Looking ahead to the Rolex Grand Prix on Sunday, who do you think your biggest competition is?

Daniel Deusser: There are quite a few really good competitors here this weekend, so it is hard to say. I think McLain Ward and Clinta will go well, Steve Guerdat and Bianca are hard to beat when they are on form as well – it will be a good competition for sure.