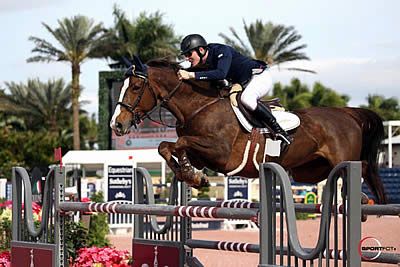 In the $35,000 Douglas Elliman 1.45m Jumpers CSI 5*, Daniel Coyle, 23, and Tienna, a ten-year-old Canadian Sport Horse mare by For Pleasure x Polydox owned by Ariel Grange, were fastest for victory. They completed the power and speed format course, designed by Ireland’s Alan Wade, who will also course design for the 2018 FEI World Equestrian Games™ Tryon this September.

Coyle and Tienna finished the second half of the course in 28.50 seconds for victory. They just pipped Shane Sweetnam (IRL) and Cyklon 1083, owned by Spy Coast Farm LLC, who had the previous leading time of 28.70 seconds. Close behind was Santiago Lambre (MEX), who rode his own Doloris to third place in 29.04 seconds and was fourth on Integrated Services Florida LLC’s D’Artagnan in 29.52 seconds.

Victory in the $8,000 Rose Hill Farm 1.40m CSI 2* went to Ibrahim Barazi of Jordan, who not only is the first rider from Jordan to win in the FEI division at the Winter Equestrian Festival, but also scored his first FEI victory in just his fourth FEI competition. He rode Omnia Incipit, a 10-year-old mare owned by IB Stable, to the win in a time of 37.15 seconds.