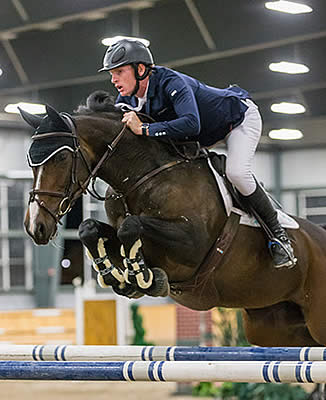 Caledon, Ontario — It was a case of history repeating itself as Ireland’s Daniel Coyle won the $36,500 CSI2* Caledon Cup – Phase 2, presented by HEP, Aviva Insurance, and Edge Mutual Insurance, for the second year in a row on Friday night, September 20, at the CSI2* Canadian Show Jumping Tournament held at the Caledon Equestrian Park in Caledon, ON.

Riding CHS Krooze, Coyle topped a starting field of 25 entries, including seven jump-off contenders, for Friday night’s win.  Having jumped the $36,500 CSI2* Caledon Cup – Phase One, presented by RAM Equestrian, a speed round held outdoors on Thursday, competitors moved indoors for the second phase of the Caledon Cup.  Riding in reverse order of placing from Thursday, Coyle had the advantage of being the penultimate rider on Friday night and, ultimately, the final jump-off challenger over courses set by course designer Catsy Cruz of Mexico.

“It is always an advantage to be at the end of the class; I got to see the first two go in the jump-off and see where I could be a little faster,” said Coyle, 24.  “I knew I had a good chance; I just had to not over-cook it.  I heard Amy’s time and knew it was fast, so I had to open her up a bit but still leave the jumps up.”

Coyle’s clear jump-off performance in a time of 36.56 seconds easily gave him the win over Canadian Olympian Amy Millar of Perth, ON, who had stopped the clock in 39.88 seconds riding Ericson, a 10-year-old Dutch Warmblood stallion owned by Millar Brooke Farm Ltd. and Partners.  Mark Kinsella, also of Ireland, took third place after jumping clear in a time of 41.21 seconds aboard Stern Dei Folletti, an eight-year-old Holsteiner gelding owned by Morning Star Sporthorses LLC.

“She has to be one of the fastest horses I’ve ever ridden in my life,” said Coyle of his winning mount, CHS Krooze, a nine-year-old Irish Sport Horse mare sired by Kroongraaf.  “I’ve never been on a horse that sees the jumps before I do.  My friend in Ireland, Peter Smyth, told me when I bought her from him that she was the most competitive horse he ever rode.  She knows exactly what she’s doing, and she knows the difference between the first round and the jump-off.

“I got her in Florida at the start of this year; she has a lot of blood and is a very talented jumper,” continued Coyle.  “It took me about six months to get to know her, figuring out the right bridle to use and that sort of thing.  Now that she’s comfortable, I can concentrate on jumping the fences.  She has the heart to be at the top.”

The change of scenery for the three phases of the Caledon Cup is one of the things Coyle appreciates most about the unique format.

“That’s what is nice about changing the venue from day to day,” reflected Coyle.  “There are not many shows that do that format with jumping outdoors, then indoors, then Sunday is outdoors again for the grand prix.  The indoor brings a different atmosphere, and the crowd is closer to the jumps.  Everyone can see what is happening.  It’s up close and personal.  It takes a special horse to not mind where it’s going to jump.”

With a second-place finish in Thursday’s speed round and a win on Friday night, Coyle and CHS Krooze are closing in on the Caledon Cup, awarded to the top horse-rider combination following all three phases.  Coyle has an added incentive this year, as show organizer Equestrian Management Group (EMG) has introduced a new $10,000 bonus, presented by RAM Equestrian, to be awarded to the winner of the Caledon Cup.

Coyle will face stiff competition in the form of 17-year-old Sam Walker of Nobleton, ON.  Hot off winning team gold and individual silver medals at the recent North American Youth Championships, Walker claimed the $36,500 CSI2* Caledon Cup – Phase 1, presented by RAM Equestrian, on Thursday riding Coralissa, a nine-year-old Holsteiner mare owned by MarBill Hill Farm.  Walker negotiated the speed round in a time of 58.81 seconds, leaving all the jumps in place to take victory over Coyle, who was second with a time of 59.21 seconds riding CHS Krooze and third with a time of 59.51 seconds riding Leilani, his nine-year-old grey Holsteiner mare.