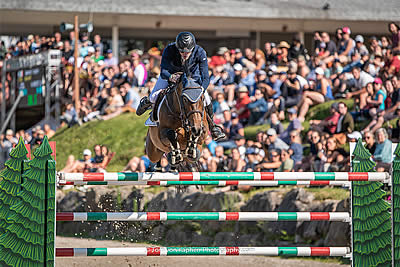 Bromont, August 4, 2019 – Daniel Coyle ran away with first and second place at the CSI3* Grand Prix presented by the Gouvernement du Québec at the International Bromont held at the Bromont Olympic Equestrian Park.

Michel Vaillancourt, the course designer for this second week of competitions at International Bromont, prepared a difficult course for the final Grand Prix of the 44th edition of the competition. The technical difficulties, the short approach at an angle to the second obstacle, the combination on a straight line towards the ingate followed by a tight turn going to the sixth effort, as well as obstacle 11 preceded by a broken line and followed by a short 90-degree turn were the most trouble for the participants.

The lion’s share
Young twenty-three-year-old rider Stevie Murphy (CAN) is the first to execute a clear round with her mount Eba b RK in the first round. She is soon joined by Christine McCrea (USA) & Jarcobond Van Den Oude Eik, Julia Madigan (CAN) & Dee Jee, Kevin Babington (IRL) & both his mounts Super Chilled & Shorapur, Jill Henselwood (CAN) & Eblesse, as well as Daniel Coyle (IRL) with Cita & Farrel.

First to come back for the second round, Stevie Murphy executes a perfect round with Ebab RK in second in a time 45.25 seconds. Daniel Coyle & Cita, fourth to come back on the course, execute the best time in 37.12 seconds with a clear round; nobody will be able to dethrone the pair. Coyle will then execute the second-best time with Farrel, thus allowing him to leave with 53% of the prize money for this Grand Prix, presented by the Quebec Government.

For more information, visit the web site at: www.internationalbromont.com.