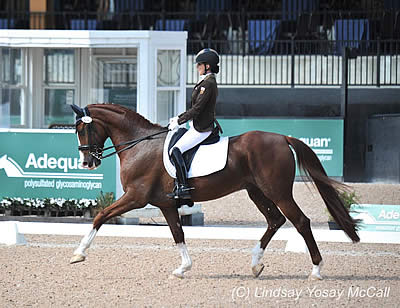 Wellington, FL – December 11, 2019 – The love for horses has no boundaries. That is what makes the Para-Equestrian discipline so important. It gives riders with physical disabilities (whether they were born with them, occurred over time, or were the result of an injury) a place to compete with the highest goal of becoming a Paralympian and showing at the Paralympics. Cindy Screnci of Wellington, Florida exemplifies an athlete that has not let an injury stop her from achieving international aspirations on the animal she loves.

When Screnci was a child, her mom, a single parent, scraped together $800 to buy her first horse. Screnci and her horse competed in Gymkhana including barrel racing and pole bending. Screnci took a break from riding to do “life” and when her daughter was eight years old, she started riding in the hunter and jumper divisions alongside her daughter. Living in South Florida, Screnci enjoyed competing at a high level with her jumper Kasimir. The pair accumulated top accolades including several year-end awards, a Silver Stirrup Award, finished first in the North American League Jumpers, and many other top honors. In 2015, Screnci sold Kasimir and she was in between horses. Screnci recalled, “I was honestly just playing around in the low adult jumper ring on a friend’s horse for the weekend.  We had won the speed class the day before and went clear again moving us on to the jump-off.  This horse was a small, speedy guy and in the jump-off, we had done a few tidy tight turns so we were ahead by more than four seconds.  The second to the last line was a one stride, then five strides to a decent sized oxer, followed by a quick turn to the last line.  We went over the oxer and my horse spooked at a jump that was not part of the course but was set a bit close to our line. When he jogged left, I went right. I landed on my feet and twisted, breaking my ankle pretty severely. This type of injury would have been a normal 8-12 week recovery; unfortunately I contracted Osteomylitis, a severe bone infection, resulting in 25 surgeries over the next three years and a permanent disability in my left ankle.” Screnci wasn’t sure where her riding was at this point but with a purchase of Sally L from Murray Kessler, her next chapter began. Screnci explained, “Sally had been quite a successful jumper and had a lot of dressage training in her past. My friend Natalie Liebowitz, who sold the mare to me, told me that Robert Dover had wanted Sally for the Para-Dressage program because he loved her so much. With a great horse and my permanent disability, I thought I could be classified as a para-dressage rider, and the rest is history.  I started riding with David Marcus and lessoning on Sally L and absolutely fell in love with para-dressage. Going from the jumper ring to dressage has been great. I have had to change my seat completely and have learned essentially eight years of dressage in what will be a year in December, but I train six days a week and have dedicated myself to becoming a successful Grade V para-dressage athlete.”

Screnci’s success in a short amount of time includes training with Marco Bernal. She stated, “Marco has been the other piece of this crazy puzzle. He is an internationally successful Grand Prix rider who is referred to as an ‘Icon in the dressage world’ by everyone I meet. I am very fortunate and blessed to have Marco and his team on my side.  Every single person in his barn is supportive, excited, and a constant inspiration to me.” Outside the barn, Screnci’s husband Stephen and her children Lia and Bradley are key people in her village of support. Screnci recalled, “When I sat down and told them about my dreams and ambitions regarding para-dressage and competing Internationally with the big goal being Tokyo 2020, they were all in.  Finding Eragon VF (with the help of international para-dressage athlete Kate Shoemaker), training six days a week, competing on a regular basis, and now with the purchase of a new edition to the family, Ricci, my superstar school master, they have been with me all the way.”

Not only is Screnci putting in the hours in the ring to reaching her goal of the Tokyo Paralympics in 2020, but she is putting in the time with watching and researching the top athletes in Grade V. Screnci explained, “In a short amount of time I have learned that para-dressage is every bit as competitive as able bodied dressage.  The level of competition internationally even more so.  In my grade (Grade V) there are para-dressage riders that compete able bodied Grand Prix such as the United Kingdom’s Sophie Wells who has competed and won against such riders as Charlotte Dujardin.  I study all of the International riders regularly so I can be a prepared as possible when we eventually meet.”

With the discipline crossover from the hunter jumpers to para-dressage Screnci has noticed that there is a negative connotation with being seen as a para-dressage rider among equestrians. Screnci said, “Para-dressage is so much more than people in the United States seem to understand.  I am hoping to help change that and open doors for the US Para-Dressage program. I don’t want to see new potential riders shy away from para-dressage, especially in the higher grades of four and five.”

Screnci is enjoying helping to educate while doing the sport she loves. Screnci concluded, “Riding is more than my passion; it saved my life.  I grew up riding and owning horses and they are an intrinsic part of me. I wouldn’t be me without horses in my life the way they are. It’s very hard to explain to people who are not horsemen.  When I broke my leg, many doctors and much of my family not only asked but insisted I give up horses and riding.  Not my husband, or my children, but others in my family and of course friends. Three years of surgeries, external fixators, bone graphs, skin grafts, weeks of IVs, physical therapy and pain – what kept me going was knowing that at some point I would find my way back to these amazing creatures and would feel whole once again.”

For more information about the USPEA, please visit www.USPEA.org or contact USPEA President: Hope Hand by e-mail: hope@uspea.org or by phone: (610) 356-6481.