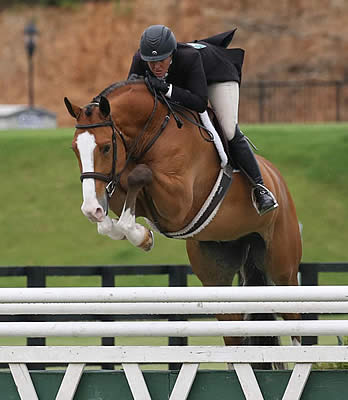 Mill Spring, NC – July 6, 2018 – Julie Curtin of Woodstock, GA and Cassico, owned by Rebekah Warren, jumped to victory in the $50,000 USHJA International Hunter Derby on the Derby Field at Tryon International Equestrian Center (TIEC) during the fourth week of Tryon Summer Series competition. The duo rose to the occasion after a first round score of 184 and kept an ironclad grip on the blue rosette. Curtin piloted the gelding through the handy round earning a 196 to land on a final score of 380. Second place honors were awarded to Dorothy Douglas of West Bridgwater, M, riding MTM Farm’s MTM One Time to a collective score of 373.5. Tracy Fenney of Flower Mound, TX and MTM Outbid rounded out the top three, placing a second MTM Farm entry into the top three with a final score of 370.

The win was a memorable one for Curtin, as it was her first time atop the leaderboard in an USHJA International Hunter Derby, as well as her mount’s first year competing in major derbies of this size. “It feels awesome,” Curtin commented. “He handled everything great. He’s by nature a very good-brained horse and he handles everything really well.”

Despite only being seven years old this year, Curtin has big plans for the Holsteiner gelding, whose even temperament has landed him the reputation of being a ham back at the barn. “He’s going to Derby Finals this year,” she explained. “He’s young, but it doesn’t make me nervous because I’m so confident with him. He just gives you the best feeling in the world. I did the high performance with him this week and he was champion, so I’m starting to prep him for all of that.”

The pair navigated the Andy Christiansen designed course with ease, besting the field of 23 other horse-and-rider combinations in the process. “We were all worried that with the grass and the rain it was going to be too slick,” stated Curtin, “but the footing is so nice and they’ve done such a good job with the field that it was great out there.”

The gelding, sired by fellow competitor Callie Seaman’s veteran Derby horse, Carrico, was originally purchased to be an adult amateur ride for his owner. After a quick assessment of his talents, it was clear to Curtin that he also deserved a chance to prove himself on the Derby field. She noted, “His owner does him in the amateurs, so he was bought to be an amateur horse, but he’s just so great at the derbies. That’s just his calling.”

Curtin continued, “Last year it was hard because we did the Pre-Greens with him because he was a baby, but the jumps were just so easy for him. It was hard keeping his attention because the jumps were so little and we were thinking about how we couldn’t wait to step him up. Last year we did a National Derby out on the grass and it was like he was made for this. He loves it.”