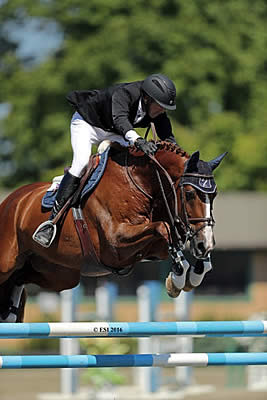 Culpeper, VA (August 31, 2016): Riders and horses turned out for a weekend of big jumper prize money at HITS Commonwealth Park during the Constitution Classic in Week V for the $30,000 HITS Grand Prix and the $25,000 Brook Ledge Grand Prix.

$30,000 HITS Grand prix
Harold Chopping of Southern Pines, North Carolina has been a consistent winner at HITS Culpeper this season, winning three Grand Prix and placing in the top five in every Friday and Sunday Grand Prix at HITS Commonwealth Park since April.

Week V proved to be no different for Chopping; after claiming second and third in Friday’s $25,000 Brook Ledge Grand Prix, Chopping returned on Sunday to win the $30,000 HITS Grand Prix. The victory came aboard Basje, owned by Kendra Bullington, earning the pair their fourth blue ribbon together at Culpeper this year.

“He’s a very talented horse, and is also very careful,” Chopping has said of the 10-year-old Dutch Warmblood gelding.

Seven went clear over the first-round course designed by Manuel Esparza of Mexico City, Mexico and moved on to the jump-off. The first three trips would produce four faults each, including fifth-place Gavin Moylan of Middleburg, Virginia aboard Pernod, owned by Alpha Omega Farm. Moylan won the $30,000 HITS Grand Prix in Week II at HITS Culpeper. They clocked in at 44.053 with four faults.

Following Moylan was Andrea Torres Guerreiro, who would capture the first clear round in the shortened course. Guerreiro, of Waterford, Virginia powered through the course piloting Fifty Shades. They stopped the clock in 46.589, which would eventually garner them the second-place prize.

Three trips remained, and Manuel Torres was next to take the stage. Also riding out of Waterford, Virginia, Torres and his mount Christofolini H, owned by Andrea Torres Guerreiro, passed the timers in a speedy 43.924, but an unfortunate rail at the A element of the mid-course combination would earn them fourth place.

Chopping and Basje were next to put their plan to the test. With a clear round in the books for Guerreiro, Chopping knew he had to be quick and clear, and also put down a fast enough trip to hold out for the one trip after them. They sped through the jump-off, taking each fence by storm and shaving time off the clock. They crossed the finish in a lightning-fast 41.413, five seconds ahead of Guerreiro.

Mary Lisa Leffler of Brookeville, Maryland had the final chance to take the glory. She and her ride, Bling Bling, owned by Rolling Acres, took to the course no holds barred in an attempt to catch Chopping’s speedy clear round. As the seconds ticked by, they powered towards the finish, but a heart-breaking rail at the second-to-last fence, and a time of 42.951, sealed their spot in third place.

$25,000 Brook Ledge Grand Prix
A new name topped the leaderboard at HITS Culpeper this season with Sloane Coles of The Plains, Virginia taking home the blue with Esprit, owned by The Springledge Group.

Eight challenged the shortened course in Friday’s $25,000 Brook Ledge Grand Prix, with four producing a clear jump-off round in contingency for the winning prize.

Southern Pines, North Carolina equestrian Harold Chopping was first to contend aboard his trusted gelding, Basje, owned by Kendra Bullington. As the first to go in the jump-off, they locked in a solid round in a quick, clear 32.690-second round and would make it out with the second place prize when the class was done.

Following Chopping was Manuel Torres riding Christofolini H, owned by Andrea Torres Guerreiro. Coming off a $25,000 Brook Ledge Grand Prix and a $30,000 Purina Animal Nutrition Grand Prix win at Culpeper in Week IV, Torres was ready to battle for the blue. A heart-breaking rail at the final fence earned the pair four faults, stopping the clock in 31.430 for the final spot in the top five.

Alexa Lowe-Wiseman of Upperville, Virginia and Synapse de Blondel, owned by Paillot Equine Consulting, were next to test the shortened course. They clocked in clear in 36.880, a cool, clear round that would ultimately earn them the fourth place prize.

The next clear round of the jump-off belonged to the victors, Coles and Esprit. They galloped through the course at a quick, unforgiving pace. The clocked in fault-free in 31.122, where the lead would remain.

Two trips went with no avail at topping Coles’ time. Chopping had the final round of the jump-off to try to edge her out.

Chopping competed with his second mount in the jump-off, Contefino 6, owned by Caroline Russell Howe and Lisa Tolnitch. They crossed the finish with all of the rails up, but their time of 32.860 was not enough to top Coles; they came within just two tenths of a second under Chopping’s own time with second-place ride Basje.