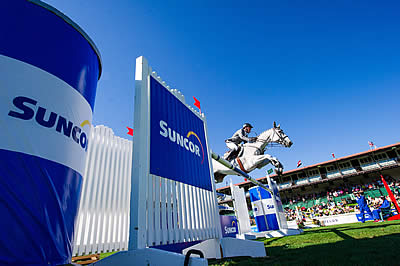 29 horse and rider combinations navigated the Leopoldo Palacios-designed course in Spruce Meadows’ iconic International Ring, each hoping to take home the spoils in the SUNCOR Winning Round at the CSIO Spruce Meadows ‘Masters’.

Local favourites Eric Lamaze and his 22-year-old prodigy, Kara Chad, wowed the excited spectators in the arena’s packed stands, both going clear and posting impressive times of 71.10 s with Chacco Kid and 71.45 s with Viva, respectively, well within Palacios’s 74-second limit. Also progressing to the second round was Calgarian Jim Ifko and his 10-year-old bay stallion, Un Diamant des Forets, who went clear in a time of 71.80 s. Seven further riders from six nations successfully negotiated the Venezuelan course designer’s tough challenge to set up a 10-pairing showdown in the Winning Round, with notable top-class riders including The Netherlands’ Maikel van der Vleuten and Germany’s Philipp Weishaupt.

Weishaupt – who has had a memorable week after securing victory aboard Sansibar 89 in Thursday’s CANA Cup – etched his and his 10-year-old grey gelding Solitaer 41’s names on to the SUNCOR Winning Round trophy after a jumping display of the highest order.

Having won the CP ‘International’ in 2017 aboard LB Convall, the duo heads into Sunday’s $3 million blue ribbon class full of confidence and are sure to push the Rolex Grand Slam of Show Jumping live contender and Weishaupt’s fellow countryman Marcus Ehning all the way.