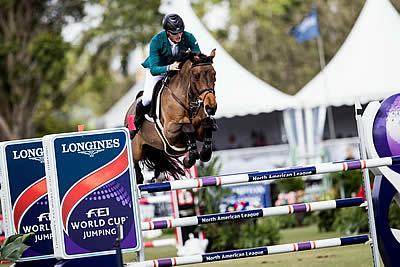 Last to go over the shortened track, Kraut, aboard St. Bride’s Farm’s Confu, made a valiant run at Coyle’s time but settled for second, finishing her round in 35.14 seconds. Engle and her veteran partner Royce finished third with a time of 35.30 seconds.

“It’s an amazing feeling to beat any one of these two women, and everybody in that jump-off!” — Daniel Coyle (IRL)

“It never makes it any easier when the riders are as good as they were. I saw Margie’s round and thought that was going to be tough to beat, let alone McLain and Laura, [who were jumping] after me.”

Coyle’s winning formula was to get ahead early.

“I did [one fewer] stride [than Laura] in the first line [of the jump-off], and I think that’s only the real place that I got her,” he explained. “I don’t think there was much difference in time there. I was really tight back to the third jump, and then I just tried to smooth out the finish instead of trying to do something crazy.”

Eight of the top 20-ranked American riders in the east coast sub league of the Longines FEI World Cup™ Jumping North American League competed in Wellington. With a fifth-place finish aboard HH Callas, Ward sits atop the standings, although he is automatically qualified based on his victory in last season’s final. Alison Robitaille (USA) sits second in the rankings, while Beezie Madden (USA), Leslie Howard (USA), and Laura Kraut (USA) all advanced their standings.

With his result, Coyle, ranks 10th in the east coast sub league standings, and he may now consider competing at the final stop on the North American League. That will take place at Live Oak Plantation in Ocala, FL (USA) on Sunday 18 March 2018.