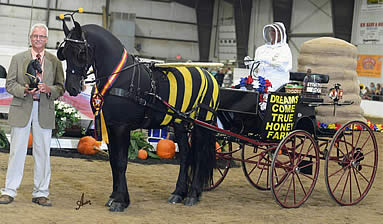 With Halloween just around the corner, equestrians are brainstorming or perfecting costumes for themselves and their horses. Several of US Equestrian’s breeds have costumes classes at their national championships that allow competitors to get creative and show their individual style. Costumes ranging from whimsical creatures to native tack and attire acknowledging the breed’s heritage impress the judges and spectators at the national championships. US Equestrian spoke with three experts to hear about their creations and tips they have to help you be successful in the show ring.

The Welsh Pony & Cob Society of America’s American National Show was livestreamed on USEF Network this year, and the costume class was arguably one of the most entertaining classes to watch from the show. One standout entry in the class was Helicon Just Notice, owned by Molly Rinedollar of Helicon Show Stables in Parker, Colo. The Welsh pony entered the ring dressed as a piñata with children from the barn dressed up as M&Ms who tossed candy into the crowd.

Rinedollar’s barn has worked together to create other impressive pony costumes, including the flag of Wales, which involved Helicon Just Notice masquerading as a red dragon and children from the barn dressing up as knights and peasants at the 2018 American National Show. Rinedollar’s inspiration for the flag of Wales dragon costume was to celebrate the 50th anniversary of the WPCSA.

“One of my [barn] moms, Sue Williams, helped me with the piñata,” Rinedollar said. “She sewed all the felt pieces on for the piñata. So we had to cut strips and sew them on, then we did the cuts up to make the layers of the piñata.”

The dragon costume for the flag of Wales was more time consuming. “Laurie Grayson, from Boulder, and her group helped with the dragon, which was a little hard because she lives over an hour away, so trying to get that together was tough,” Rinedollar explained. “We got one of those blow-up dragons that go in your yard and cut it up, sewed it, and painted it. That one took a lot of time. It had wings and the tail, so it was pretty time consuming.”

Rinedollar estimated that the piñata took two to four hours to assemble, while the dragon for the flag of Wales took at least 10 hours. The dragon costume also required several sessions to make sure the various pieces were fitting and coming together properly.

Rinedollar recommended trying costumes out before competing in them, especially if you plan on riding your horse or pony in the costume as things can shift unexpectedly. Having an easy-going pony to dress up was another tip from Rinedollar, as Helicon Just Notice was unfazed by his elaborate costumes. “He’s very tolerant and really likes it,” Rinedollar said. “He is pretty simple about the whole thing. I think he likes wearing costumes.”

Rinedollar enjoyed that the whole barn – kids and parents alike – can get involved in the costume class.  “I think it brings everybody together,” Rinedollar said. “The camaraderie of it is fun, and the kids all have a great time. They like dressing up, too.”

While the next American National Show is about 11 months away, Rinedollar and her barn are already making plans for next year’s costume. “We kind of have one that we want to do, but I don’t know how we will pull it together,” Rinedollar said with a laugh.

Gail Aumiller of Dreams Come True Farm in Carlisle, Pa. is frequent competitor at the International Friesian Show Horse Association World & Grand National Championship Horse Show, and she has partnered with her Friesian mare Sjaantje to make two carriage pleasure driving costumes come to life. Aumiller and Sjaantje teamed up as a beekeeper and honeybee in 2019, while they were a ringmaster and circus horse, respectively, along with Aumiller’s friends joining as a trick rider, a fortune teller, and a clown for a circus theme in 2016. Both years, Aumiller and Sjaantje claimed the World Champion Friesian Carriage Pleasure Driving – Costume title for their efforts.

Aumiller said she tries to come up with unique and novel costume ideas. She had seen a Friesian dressed as an eagle, and the costume’s wings that fluttered with the horse’s movements inspired Aumiller to have a winged costume for Sjaantje, thus the honeybee costume. For the circus theme, Aumiller acquired a period costume for her horse, which got her brainstorming on ways to highlight the costume. Being able to include her friends in the circus theme was highly desirable for Aumiller, too.

“It was really a lot of fun because, from an exhibitor’s standpoint, you don’t often have the opportunity to share your show ring competition with friends,” Aumiller explained. “But in a costume class like that, where you can take others and you can share it with your friends, made it very enjoyable for me.”

Aumiller spent a full year working on her costumes, from coming up with the idea to perfecting details. She handled the dressing up herself and her horse, but her cousin helped her with anything that needed to be built and added to the carriage. She did one dress rehearsal at home with two to three helpers before each of the costumes’ debuts at the IFSHA World & Grand National Championship Horse Show.

“It seems like every time I use a costume, I tweak it a little bit more. One time with the circus show, I had to use a different carriage, so I didn’t have room to put more than the trick rider and one other person in it so I had to lose the fortune teller,” Aumiller said. “And with my honeybee, the second time I used it I thought, ‘I should have a basket with honeybee products,’ so I put honey in it and beeswax candles and different things like that.”

Aumiller recommended gradually introducing a costume to a horse, so there are no surprises and you are ready to shine in the show ring. “You just have to desensitize them, like if you are putting a flowing robe on them, you just have to do it and get them used to it,” Aumiller explained. “Sometimes it takes more than one or two sessions for them to get used to it.”

Aumiller has begun working on her costume for next year’s IFSHA World & Grand National Championship Horse Show, and her cousin has already created a cardboard mockup for the carriage. Sjaantje will have to wait and see what her next costume will be.

“She is a true champion,” Aumiller said of Sjaantje. “She does anything she can to please me, so I like to think that if I like it, then she is going to like it.”

Mario Contreras and His Andalusian and Lusitano Mounts

Mario Contreras of MC Horse Training LLC in Elgin, Ill. has claimed multiple titles at the International Andalusian & Lusitano Horse Association National Championships while displaying the native tack and attire that acknowledges the origins of the Andalusian and Lusitano horses, horses from Spain and Portugal, respectively.

When Contreras first got started showing in Andalusian/Lusitano classes highlighting the native tack and attire for the breed, he didn’t have many options until he found the right distributors, Lisa Oberman of El Sueño Español and Bill from Iberian Connection. Contreras said he now has eight to 10 outfits that range from traditional native attire to exhibition costumes.

While Contreras has a variety of outfits, each class has specific criteria that is being judged. “I have shown in the Nationals with Andalusians, the Spanish horses, and it is very important that you match the saddle, the saddle pad, the bridle, the [rider’s] shoes, the spurs, the hat, everything has to go with the Spanish outfit and a Spanish horse,” Contreras explained. “And it’s the same thing if you are riding a Portuguese horse, a Lusitano, you have got to make sure that you have everything that goes with it.”

Contreras noted that judges are taught to know the difference between Spanish and Portuguese tack and attire. “When you go into a competition, some judges are nice enough to tell you that that doesn’t go with the outfit and eventually you get more education,” Contreras said. He suggested that competitors in native tack and attire classes do their research or have an experienced individual guide their tack and attire selections.

In addition to compiling the rider’s outfits, the horses have specific tack that they wear as well. “If you see some of the bridles, the buckles that go into the bridles are actually different and sometimes it gives it away if it is Spanish or Portuguese,” Contreras said. “Also, for the doma vaquera classes (pattern work highlighting the breeds’ maneuverability and impulsion) on the presentations, the bridles have what we call a mosquero. The mosquero is actually made out of horse hair and it goes on the forehead on the browband of the bridle. You can use the same bridle, but you can use a different mosquero depending on the horse’s colors. … It is called mosquero because it kind of gets the flies away from the horse’s face. Also, when you are riding and doing doma vaquera, you want the mosquero to swing side to side and, to the judge, that will give a good sense of the horse having a good rhythm on the walk.”

Since some of the native tack pieces may seem out of the ordinary, Contreras suggested treating each horse as an individual as you introduce them to something new. “It just depends on the horse. Some horses are very sensitive, more so than others, just like people,” Contreras said. “I think the mosquero is one of the most difficult things because not all horses accept the mosquero right away, so you have got to be careful how you introduce it and, of course, doing it slowly will be the best thing to do. Sometimes just pass it by his face. What I usually do is when I see a horse who is not too comfortable with it in the beginning, I usually put a little shredded plastic bag at the end of my whip and slowly start petting him with it until the horse gets used to it. Then, eventually you put the mosquero on the browband of the bridle.”

In addition to native tack and attire and doma vaquero classes being fun, they also give a valuable recognition to the heritage of the Andalusian and Lusitano breeds. “It is important to continue the tradition, and I love that the association continues to promote and have those classes for people,” Contreras said. “Every time I go to Nationals, I think that is one of my favorite classes to dress up and really show the breed because, at the end of the day, we are promoting horses. There is nothing better than continuing to show their beginnings and the culture of how horses became what they are now.”