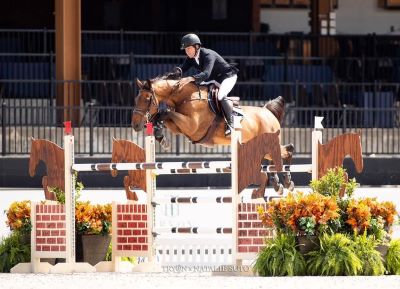 As a combination, Swail and the 2009 Selle Francais gelding (Diamant De Semilly x Rivage Du Poncel) owned by Mannon Farm are ranked fourth in the world, showing off their speed and technicality in Thursday’s course set by Bernardo Costa Cabral (POR).

“He had a great year last year,” Swail said of Vital Chance, “and he’s starting off very well this year. I started with him at the beginning of last year, so I’ve had him for about a year and a half now. He’s been amazing. He’s so quick and careful, and has a lot of clear rounds. The two of us have a good partnership; it’s fun!”

After what Swail described as a “friendly but difficult enough” first round, Swail walked into the jump-off up against a faster time than he would have liked, he acknowledged. “The jump-off was a bit too fast for my liking, to be honest, but I knew I was riding a fast horse. I’d watched a few go before me; Lauren was very fast and so was Luis, so I knew I just had to go as quick as I could, and it worked out well for me.”

Keeping up with his hot streak at the international levels, Swail will be seen competing all across the continent this summer, but has started off on a positive note in the Tryon Spring Series after previously enjoying a streak of international wins at TIEC in 2021. “I try and keep a couple horses on the East Coast and a couple on the West Coast, and travel back and forth,” he concluded.