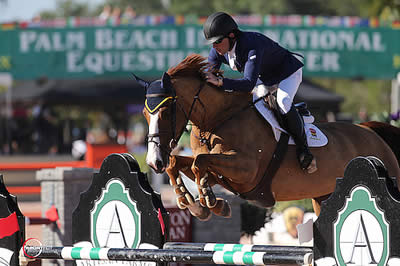 Wellington, FL – January 18, 2015 – The 2015 Winter Equestrian Festival (WEF) concluded its second week of competition, sponsored by Wellington Equestrian Realty, on Sunday with a win for Ireland’s Conor Swail and Martha Louise in the $34,000 Suncast® 1.50m Championship Jumper Classic. Earlier in the day, Kelli Cruciotti and Chamonix H were victorious in the $25,000 Artisan Farms Under 25 Grand Prix, presented by Equine Couture/TuffRider. Ellie Ferrigno and Boneparte Z won the championship in the Echo Junior Hunter 3’3″ division.

Course designer Luc Musette finished the week with 34 rounds in the 1.50m competition with six to jump-off. Swail and Ariel and Susan Grange’s Martha Louise cleared the short course in 37.23 seconds for the win over Brianne Goutal (USA) and Remarkable Farms LP’s Wirma in 38.49 seconds. Kelsey Thatcher (USA) and Pony Lane Farm’s Everything finished third in 39.26 seconds. Eric Lamaze (CAN) was fourth in 39.47 seconds with Artisan Farms LLC’s Coco Bongo.

Following a successful year with several wins at Spruce Meadows, Martha Louise had a long break and came back fresh and in top form last week after not jumping since September. The 11-year-old Swedish Warmblood mare (Maloubet de Pleville 1039 x Wolfgang) is known for her speed and put it to the test with an excellent round on Sunday.

“We started her off last week, and she jumped very well,” Swail said after the class. “She probably should have been second in the grand prix last week, but I made a little mistake on her. Then she jumped a good first half of the WEF (Challenge Cup) on Thursday. It was a little bit disappointing in the second half of it, but then you go away and you think about what could be better. I think I rode her a little better and gave her a little more confidence and today she was totally amazing. I thought she was great.”

Commenting on his jump-of, Swail explained, “There were a few options and I had an early draw and there were a few quick ones behind me, so I think you had to just have a good, tight round. From jumps one to two, I got a good shot. I went wide in the seven-stride. Maybe six was an option there, but I decided to go seven. She was very good back to the liverpool and the vertical, left one out to the next one, and got a very good turn back to the double of verticals. Then I thought she was quite good coming home. I knew it was going to be close. Brianne jumped very well there. I would say if she had gotten a good shot to the last fence there she would have been close to beating me.”

Swail was especially happy to earn the win on Sunday to cap off an excellent week for owners Susan and Ariel Grange. Their horse, Dixson, was second in the $34,000 Ruby et Violette WEF Challenge Cup Round 2 on Thursday and stepped up to win Saturday night’s $50,000 Wellington Equestrian Realty Grand Prix CSI 2* with Canada’s Ian Millar.

“This a great win. My owners, Sue and Ariel Grange, have had a great week,” Swail acknowledged. “They were second in the WEF, they won the grand prix, they have now won the 1.50m, so they could not really ask for much of a better week. We have great horses and we have a good team of people, so it is great that we have started off so well.”

Returning 13th in the jump-off, Cruciotti chose an inside turn option to the final two fences that shaved vital seconds off her time and stopped the clock at 38.47. The effort bumped Under 25 Grand Prix Series veteran Nicole Bellissimo and Bellissimo, LLC’s VDL Bellefleur to second with a time of 39 seconds flat. Just fractions slower, Sydney Shulman aboard Jill Shulman’s Venice crossed the timers in 39.70 seconds for third place.

“I wanted to have a nice, forward round and was originally going to do the inside turn,” said Cruciotti. “Then I went back and forth and finally thought I might as well try.” The gamble worked out perfectly for the young rider who is a senior at K12 International Academy and trains with her mother Cindy Cruciotti at Serenity Farm Show Stables in Elizabeth, Colorado.

Cruciotti has been partnered with 14-year-old Swedish Warmblood Chamonix H for two years and is eager to showcase the mare’s talent. “She had a lot of experience before I got her. She has done some 5* classes and I don’t have that much experience, so it’s a nice combination to know my horse has plenty of scope and I can trust her throughout the course,” she said. “I am really looking forward to seeing her do the different classes offered [in the series] from the speed to the team event. It’s a fantastic series, and I have to thank Equine Couture/Tuff Rider, (Dutta Corp.), and Artisan Farms. ”

Riders concurred that Musette’s course was a true test of horse and rider with lines built on the half stride and big, wide oxers. But 21-year-old Bellissimo maintains it was an even bigger test of familiarity. “He set a course where you had to know your horse and whether they could handle the options that were there,” she said. “Walking it I didn’t think 18 would go clear, but there were a lot of exceptionally nice horses and talented riders and you saw that come out over this course.”

Bellissimo also opted for an inside turn and gallop to the final fences of the course, but couldn’t make the win. “I was a little slow from one to two and I got stopped doing the inside turn,” she said. “I didn’t think I was going to do it when I went into the ring. My trainer Candice [King] said to see what happened when I landed. VDL Bellefleur is a really brave horse and I thought that I’d do it and luckily it ended up being okay.”

Bellissimo plans to compete in all classes offered in the Series while juggling a course load at Harvard University where she is currently a Sophomore.

While Cruciotti and Bellissimo have found a rhythm with their horses, it was Shulman’s maiden voyage in the irons of Venice. “I bought this horse a week ago and this is my first horse show on her, so this is very exciting for me. It’s a good start with her,” said 19-year-old Shulman about the nine-year-old Swedish Warmblood mare. “I knew her in Sweden as a seven-year-old, loved her and I got her. She just started at 1.60m this fall, so it’s all new for her.”

Sunday’s Artisan Farms Under 25 Grand Prix sponsors and equestrian apparel brands Equine Couture and TuffRider were represented by the company’s founders who have returned to the horse show scene after previous involvement at WEF several years ago.

“We feel that being part of something at such a high level really catapults our brands into the limelight,” said Laurie Sharma. “We love and enjoy every second, especially being involved in a grand prix with young, talented riders and to be seen by so many people. This is the equestrian capital of the world, so for us it’s a pure honor.”

Besides sponsoring classes in the Series, Equine Couture/TuffRider truly appreciate the input of up-and-coming riders. “We are happy to continue the association with young rising stars,” said Varun “Timmy” Sharma. “We have an ambassador program starting, and we will be electing from winners of the Series. From the ambassadors, we look forward to getting product ideas and input as to how we can improve.”

While the horizon is bright for the top finishers in this week’s Grand Prix, the future is also promising for the series as a whole. “I’m so pleased about the success of the Artisan Farms Under 25 Grand Prix Series,” said Mark Bellissimo, CEO of Equestrian Sport Productions. “I want to thank the Ziegler family of Artisan Farms, as well as The Dutta Corp. with Guido Klatte and the other sponsors that have joined us for the Series this year. We created this program four years go to provide a path for talented young riders. With 70 horses jogging for the classes this week. With the level of participation increased this year, the enthusiasm for the Series is outstanding.”

The Series gives young riders a valuable stepping-stone from the junior and amateur ranks to the grand prix level and culminates with the $50,000 Artisan Farms Under 25 Grand Prix Series Final. The Final will take place Sunday, March 22 on the grass derby field at The Stadium at Palm Beach International Equestrian Center during WEF 11.

The reserve champion was awarded to Molly Zisook and her horse C’est Si Bon. Over the two days of competition the pair finished first and fourth over fences and second in the under saddle.

Even though Ferrigno is new to Boneparte Z, she is used to being on a horse. Only 12 years old, Ferrigno has been riding almost her whole life and started taking the sport seriously about four years ago. With a home base in Newtown, CT, Ferrigno is able to travel to Florida during the winter to compete at WEF.

After the division champion was announced, Ferrigno was very happy about how Boneparte Z performed over the two days. “I couldn’t believe that I won both trips yesterday and that he [Boneparte Z] was first and second today,” Ferrigno smiled.

Trainer Val Renihan was also excited to see Boneparte Z and Ferrigno top a field of 25 competitors. Renihan commented, “I thought the horse went beautifully for her [Ferrigno], and she found all the jumps so smoothly.”

Along with competing in the Junior Hunters, Ferrigno also competes in the 3’6″ Equitation classes. Despite having five years left as a junior, Ferrigno looks forward to riding as an amateur in the future.