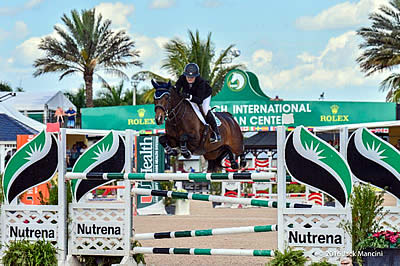 Wellington, FL – April 25, 2016 – On the final day of competition at ESP Spring III, Victoria Colvin of Loxahatchee, FL earned top honors in the $30,000 PonyUp Horse Treats Grand Prix at Palm Beach International Equestrian Center (PBIEC) aboard Austria 2, owned by Take the High Road, LLC, as the duo finished with a time of 33.174 seconds. Angel Karolyi of Aiken, SC, and Indiana 27 secured second place crossing the timers in 33.429 seconds, while Margie Engle of Wellington, FL and Bockmanns Lazio collected third place with a strong finish in 34.288 seconds. Competition at PBIEC will resume with ESP Spring IV beginning on Friday, May 6, and continuing through Sunday, May 8.

Colvin and Austria 2 topped a class of 43 entries in what Colvin said was the biggest track Austria 2 had tackled so far in their career together in the U.S. The course, set by Catsy Cruz (MEX), saw 11 combinations move into the jump-off, while Colvin piloted Austria 2 to only one of only four double clear rounds on the afternoon.

“We didn’t get her too long ago so we’re still creating a relationship with each other. We bought her on one of our Europe trips last summer right before The Hampton Classic,” explained Colvin. “I rode her in the 7-Year-Old classes and she just turned eight this year. We’ve done some of the 1.45m ranking classes with her and she’s definitely moving her way up.”

The 2008 Holsteiner mare (Casall x U2 I) is incredibly scopey and has an element of quickness to her way of going, which Colvin has been trying to refine over the past few months, helping to create more rideability on course.

“She’s getting very rideable and she’s caught on very fast in understanding what we’re asking her to do,” she explained. “We’ve changed a lot about bitting finding what’s right for her and she’s getting smart. She’s becoming much easier to ride.”

Colvin went last in the order with Austria 2, having already ridden the course aboard Echo Van T Spieveld and Chanel B 2 earlier in the class. Her previous rides helped her find a suitable track for Austria 2, who tends to be faster over the ground.

“I had a chance to see a couple of people go, but not as many as I thought I would for the jump-off. I don’t want to go too fast with her yet because she just doesn’t have enough experience right now, commented Colvin. “Someone was two seconds faster, but had a rail. I just wanted to go in and put down a nice round with her. Like I said, she’s typically pretty fast, so you’re already motoring around and I did want to go for a top ribbon.”

As for the course, it was one of the bigger tests the pair has seen since Colvin took over the ride, and she was impressed with the way Austria 2 handled the more technical questions set around the track. She explained, “It was bigger than I thought it would be for sure and larger than the past two weeks. It had some tough questions, which was good for us. I ended up doing five in one of the four stride lines and the triple combination was big. It was overall a very nice course.”

Heading next to Lexington, KY, Colvin will bring a solid string of jumpers with her, including Don Juan, Chanel B 2, Echo Van T Spieveld, Cafino, and Austria 2, in which she will look for strong finishes aboard each. As for Austria 2, she hopes the mare will continue to gain experience and confidence in the ring, which will set them up nicely for a strong debut in the bigger classes later this year.

“Right now, she’s going to keep doing the 1.45m classes and move up to the 1.50m maybe by the fall. I want to make sure that we aren’t rushing her, but she’s got a lot of talent and I’m excited to see where she can go,” she concluded.

German Camargo of Loxahatchee, FL and his own Centurio earned victory in a competitive $5,000 1.35m class at ESP Spring III with a time of 35.755 seconds. David Blake of Wellington, FL and Bella Donna, owned by Pine Hollow Farm, took second place, finishing in 37.411 seconds, while Denise Wilson of Ocala, FL and Alonso, owned by Neil Jones Equestrian, rounded out the top three, completing the track in 37.622 seconds.

In the $1,500 NAL Child/Adult Jumper Classic presented by The Tackeria, Ally Marrinan of Saunderstown, RI and Ruby, owned by Rose Hill Farm, won the class, finishing in 36.528 seconds. Ella Bostwick of Wellington, FL and Bull Run’s Udamann, owned by Christine Bostwick, earned second place honors with a time of 38.245 seconds, while Maggie Alexander of Wellington, FL and her own Dukata collected third place crossing through the timers in 38.245 seconds.

Switching disciplines, but continuing with her winning ways, Victoria Colvin of Loxahatchee, FL and Cacao, owned by Olivia Slocum, took victory in the $5,000 USHJA Hunter Classic at PBIEC with an overall score of 179.5. Colvin also picked up second place piloting With Me, owned by Victoria Colvin & Partners LLC, to a score of 179, for a small spread between first and second place.  Robert Bielefeld of Wellington, FL and HH Himself, owned by Dr. Ana Lisa Carr, took third place with an overall score of 169.

Sara Ballinger of Marion, OH and her own Wanderprinz finished earned the blue ribbon in the Ariat National Adult Medal over the weekend, while Samantha Harris of Stuart, FL and Ludger, owned by Becky Harris, earned second place. Jennifer Prior of Wellington, FL took third place aboard her own Lupicor II.

For more information on the ESP Spring Series and PBIEC, please visit www.pbiec.com.