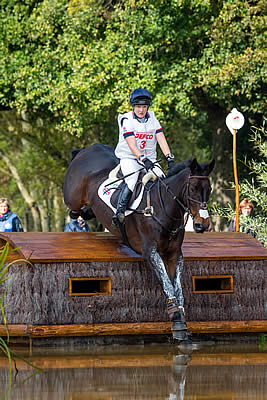 These Championships have been staged annually since 1992, and the 30th edition of the French fixture at the lovely Haras National at l‘Isle de Briand once again highlighted new and exciting talent in both age categories, and attracted a total of 103 horses representing a wide range of studbooks. The two new champions were both Holsteiners, while the KWPN and ISH studbooks filled silver and bronze in the 6-year-olds and the AA and Trekehner registers did likewise in the 7-year-old division.

The ISH Studbook claimed the overall Studbook title with a score of 151 points ahead of the German Holsteiner in second on 153 and the Dutch KWPN a close third on 153.2 when the results of both age categories were analysed.

The Ground Jury for the 6-year-olds consisted of Great Britain’s Sandy Philips, Pascal Laurencon from France and South Africa’s Lesley Mawhinney, and, from the field of 34 starters, they placed Germany’s Ingrid Klimke and the grey Holsteiner mare Weisse Duene (Clarimo/Esprit V/Romino) in pole position on a score of 38.6 after dressage.

Jung and Fischerincantas (Ibisco/Ressina/Coriano), however, were just 0.5 points behind in second place followed by the Selle Francais gelding Vingt Vingt (Rubins des Bruyeres SF/Chana du Gwern SF/Robin des Pres), ridden by Frenchman Stanislas de Zuchowicz, in third on 44.1. Dutch rider, Merel Blom, was next in line with the KWPN The Quizmaster (Albaran XX/Zarah Maro/Casco) followed by Poland’s Kamil Rajnert and the BRAND mare, Libertina, in fifth, Sweden’s Christoffer Forsberg and the Oldenburg gelding, Quinn, in sixth and the ISH gelding SRS Adventure, ridden by Ireland’s Sophie Richards, in seventh spot.

Only seven horse-and-rider combinations encountered problems over Pierre Michelet’s cross-country track, and amongst them were Klimke and Weisse Duene whose 20 penalties for a refusal at fence 15c was compounded by an additional 5.2 for exceeding the optimum time of 8.54 minutes to drop them well out of contention. So Jung moved into the driving seat when producing one of the 21 clear rounds recorded, with de Zuchowicz, Blom, Rajnert, Forsberg and Richards lining right up behind him after the second phase.

Jung had just over a fence in hand going into yesterday’s final Jumping round, but the reigning Olympic, World and European champion and World No. 1 knows how to keep a cool head under pressure, and secured the gold despite leaving one on the floor. De Zuchowicz, however, paid the price for two mistakes, which saw Blom and Quizmaster claim the silver while Richards rocketed up to bronze medal position with SRS Adventure (Newmarket Venture/Newmarket Dato Two/Aldato) when Rajnert had one down and Forsberg collected eight faults.

Horses from the KWPN Studbook filled two of the top four places, silver medallist The Quizmaster flying the flag along with the grey mare Enjoy (Cartano/next Joey/Haarlem) who finished fourth for The Netherlands‘ Sanne de Jong. When it came to sheer consistency, however, the Irish Sport Horses held the whip hand, with three finishing in the top nine and six in the top 18 in this category.

It seemed quite possible that Jung could emulate the historic double recorded by Frenchman Thomas Carlile in 2013 when the German ace also took the early lead with the Hannoverian gelding, Lennox, in the 7-year-old championship.

Ground Jury members Janis Linnan from the USA, Nathalie Carriere from France and Great Britain’s Harry Payne rewarded Jung with a mark of 38.0 for the top spot after dressage, with fellow-German Julia Krajewski holding second spot on 41.1 with another Hannoverian, Chipmunk FRH, at this early stage and Great Britain’s William Fox-Pitt in third with the Irish Sport Horse, Reinstated.

Australia’s Emma Dougall slotted into fourth with another Irish-bred, Fernhill Tabasco, ahead of Britain’s Noah Brook and the KWPN Deo Volente in fifth, while Christopher Burton held sixth spot for Australia with the ISH, Cooley Lands, ahead of the eventual champions Laura Collett and Mr Bass in seventh. The cross-country track was more testing for these older horses, but there were still plenty of clear rounds, 34 of the 67 starters adding nothing to their dressage scores, while two riders opted to retire on course and 12 were eliminated.

Amongst the latter was Fox-Pitt who had already steered the Soapdodger, lying 11th after dressage, home with nothing to add, before taking a fall with Reinstated at fence 20, the Owl Hole, when second-last to go out on the course. The multiple champion and current World No. 3 rider was taken to Angers Hospital where his condition continues to be reported as “stable” today.

The Jumping phase for the 7-year-olds proved influential, with 12 faults sending Jung and Lennox plummeting down the order, while five faults for Dougall and a single mistake for Burton also proved expensive. In the absence of the leading three who had also toured the cross-country track without penalty the previous afternoon, Collett took full advantage when moving up from overnight fourth to pole position with a foot-perfect performance from Mr Bass (Carrico/K-Jeunesse/Exorbitant).

And the 2013 double-champion and winner of the 6-year-old division in 2014, Frenchman Thomas Carlile who was lying sixth after the tour of the fixed fences, also jumped into the medals when coasting home with nothing to add to the dressage mark he had established with the AA stallion, Upsilon (Canturo Bois Margot/O Vivee/Fusain du Defey). His final scoreline of 46.5 left him just 1.3 penalty points behind Collett and 2.4 ahead of bronze medallist Vincent Martens who had every reason to be particularly pleased with his result.

Last year at the same fixture the Belgian rider was poised in gold medal position after dressage in the 6-year-old championship with the Trekehner stallion Eiskonig (Songline/Eiskonigin/Trocadero), but following two cross-country refusals he wisely decided to call it a day. On Sunday the horse demonstrated the very essence of these championships which are designed to help identify and develop potential when, with 12 months more experience under his belt, he rose from eighth place after cross-country to earn the bronze medal in the 7-year-old category when finishing on his dressage mark.