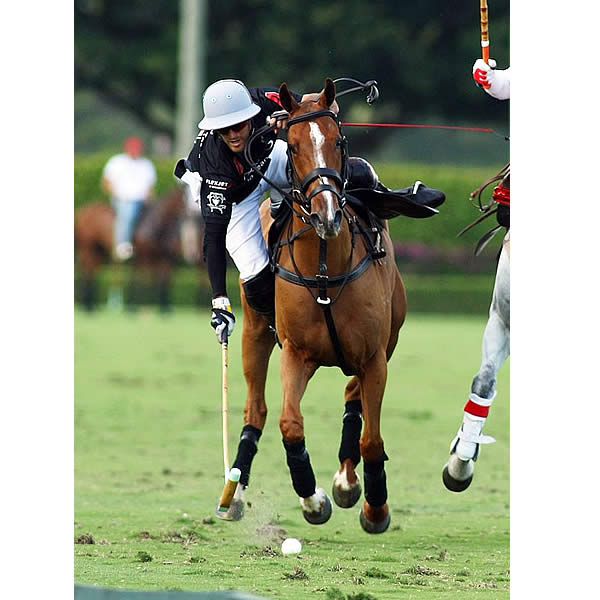 The victory avenged Coca-Cola’s loss to Audi in last year’s semifinals knocking them out of the tournament.

The fast-paced, emotionally-charged game was physical and defensive from the opening chukker.

Grand Champions Polo Club-based Audi grabbed an early 2-1 lead in the opening chukker when Mariano Gracida followed up his own long hit towards goal with a short shot to score with 2:39 left.

Audi didn’t regain the lead until the fifth chukker at the 2:16 mark on Nico Pieres’ penalty one goal for a 7-6 lead.

The teams battled back and forth the remainder of the game. Coca-Cola team captain Gillian Johnston tied the game at 7-7 with 58 seconds and seconds later Pieres defended well against a Julio Arellano goal attempt.

At the end of the fifth chukker, Sugar Erskine scored one of his two goals to put Coca-Cola ahead, 8-7.

Audi, known for its second half heroics, came roaring back when Erskine fouled Nic Roldan. Roldan converted the 40-yard penalty shot with 5:42 left in regulation to tie the game at 8-8.

Audi and Coca-Cola had several scoring opportunities throughout the game including the sixth chukker but neither could take advantage because of outstanding defensive plays.

No goals were scored from the field in the final regulation chukker.

Pieres stole the ball from Johnston and made a run downfield getting the ball to Ganzi, who just missed a cut shot with 1:14 left in the game. Audi had another late scoring run but came up short sending the game into overtime.

A controversial penalty called in the goal mouth after Audi tried to stop Coca-Cola on defense sent Arellano to the penalty line where he converted a 15-yard shot for the winning overtime goal.

“We knew it was going to be that kind of game,” said Erskine, who edged out Tommy Collingwood for Most Valuable Player honors and won Best Playing Pony with Leyla.

Both teams were changing out polo ponies frequently because of fatigue from the fast-paced game and hot weather.

“It was an intense game, it could have gone either way,” said Coca-Cola’s Julio Arellano, the highest rated American player at 9 goals. “Audi played very well. It was two tough teams. There were no easy goals today. Both teams missed goals.”

Said Coca-Cola coach Boone Stribling: “They are a great team. Audi played very well, not to take anything away from them. Nic Roldan is a fantastic player. It came down to the horses at the end.”

It was Audi’s second consecutive appearance in the finals. Audi lost to Crab Orchard in the Joe Barry Memorial Cup.

Roldan, who was averaging nearly eight goals per game, was held to four goals and finished the tournament with 42 goals, the most scored by any player in the 14-team tournament.