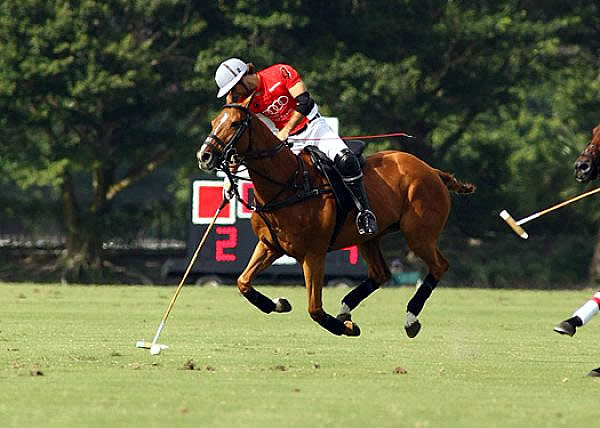 In a hard-fought, physical game that featured Audi team captain Marc Ganzi forced to leave the game after the first half with a possible fractured thumb, Audi mounted a late comeback, but fell short losing to Coca-Cola, 11-7.

Audi, still in the midst of the 20-goal season preparing for Sunday’s final against Coca-Cola in the Ylvisaker Cup, switched gears with a different lineup and needed time to make the transition.

Grand Champions Polo Club-based Audi, with brothers Gonzalito and Nico Pieres, American Jeff Hall and Ganzi fell behind early, 3-0, in the opening chukker and came within one goal (4-3 in the second chukker) but were unable to overtake the lead for the remainder of the game.

There were some flashes of outstanding play on Audi’s part including big hits from the playmaking Pieres brothers, but unforced errors and missed scoring opportunities worked against Audi.

Ganzi, with some outstanding back hits and defensive plays, came up with a big defensive stop on Coca Cola’s Julio Arellano penalty-four scoring attempt at the end of the third chukker, but it may have been a costly one. Ganzi was hit with Arellano’s ball injuring his thumb.

After being treated in the players’ tent by Audi trainer Jeremy Fedoruk, Ganzi returned to finish the first half wearing a thumb brace but was in obvious pain and unable to hold a mallet.

Ganzi left immediately after the game to undergo x-rays and determine the extent of the injury. He may be sidelined between two and six weeks depending on the severity of the injury, Fedoruk said.

Fifteen-year-old Manuel Jimenez Villamil, a top juniors player who replaced Lechuza Caracas’ Victor Vargas in the Feb. 20th 20-goal game against Coca-Cola, was called on to replace Ganzi in the second half.

Villamil, wearing blue jeans and Audi No. 1 red jersey held his own against the more-experienced players in his first 26 goal game.

“I was sitting in the crowd over there watching the game when they called me to play for the second half,” Villamil said.

“I was very excited to play,” Villamil said. “I wanted to play well; I am sorry we couldn’t win at the end. This was a good opportunity for me. I don’t know if I am playing again on Sunday.”

Nico Pieres Audi led scoring with five goals. Gonzalito Pieres scored on a penalty shot and Jeff Hall scored from the field in the sixth chukker.

Audi will return to the practice field to prepare for the prestigious USPA Piaget Gold Cup that begins March 5.

The CV Whitney Cup is the first jewel of America’s Triple Crown of polo.

Valiente I is defending champion of the CV Whitney Cup after defeating Valiente II, 10-8, in the final that featured father vs. son player-padrones with father Bob Jornayvaz prevailing for the win. Polito Pieres of Valiente I was named Most Valuable Player. Valiente returns with only one team this season featuring 10-goalers Pelon Stirling and Adolfo Cambiaso.

The CV Whitney Cup was created in 1979 and first played at the Retama Polo Center in San Antonio, Texas where it was the handicap counterpart to the U.S. Open Championship. It was moved to IPC in 2003 and has been held every year in Wellington.

Cornelius Vanderbilt Whitney was an American businessman, film producer, writer, government official and owner of a leading stable of thoroughbred horses. He followed in his father’s footsteps as an avid polo player and won the U.S. Open three times.