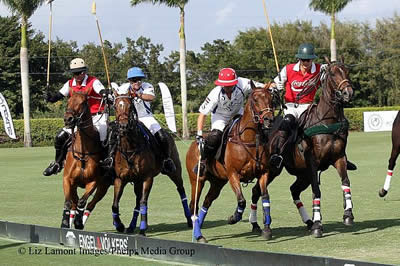 Caset rode in the 10-goaler seat otherwise occupied by Adolfo Cambiaso, who owns the BPP Caset piloted. Cambiaso, who has played two winning games for Valiente this season at IPC, was very much a part of Sunday’s final. Closely observing from the Valiente tent, he offered pointers to the team on breaks. Play briefly stopped in the fifth chukker, when Bob Jornayvaz appeared to have a possible injury. Cambiaso sprinted on foot full speed down the entire field and stood by Jornayvaz’s side until he remounted.

Regardless which team one was rooting for, it was an exciting (and nerve-wracking) match from start to finish. The score was tied or separated by no more than one or two points the entire time, with the play so even that neither team ever got the upper hand. It was anyone’s game at any given moment, all the way until the final moments of the sixth chukker. With the score tied at 13-all, Julio Arellano scored on a penalty, and Coca-Cola ran the clock down for a 14-13 win.

Caset kicked off the game on a scoring rampage, pounding in eight goals in the first four chukkers, many of them with Santi Torres assists. Contributing four goals of his own (all from the field) in the match, Torres played an tremendous defensive game as well, as did Mason Wroe.

“That was one of the hardest games I’ve ever played,” said Wroe. “That’s a very, very good team. Bob and Rob are so, so tough. Bob’s a warrior. Hats off to them!”

Valiente enjoyed a two-point lead as the second chukker wound down (5-3), but it was short-lived. Another goal by Caset notwithstanding, Coca-Cola came out swinging in the third, making four goals and taking a one-point lead.

The rest of the game was effectively a declaration of war by both sides. Caset continued his scoring blizzard, making three goals in the fourth chukker. Arellano scored twice on penalties in the fourth, pulling off a repeat act in the fifth.

Sugar Erskine was his usual force of nature throughout the game, making four field goals. The rest of the time he dashed about the field like a greyhound in the final stretch, startling his opponents at critical moments as he materialized out of the vapor like a genie from an uncorked bottle.

“It wasn’t maybe the prettiest of games to watch, but it was a lot of work off the ball for us,” said Erskine. “Honestly, I couldn’t really remember anybody scoring any goals, and I looked up and it was 13-13. All I remember is playing defense all afternoon. It was obviously just one of those kind of days. It didn’t feel like goals were getting scored, but they were happening. We all did our part, and it came down to I would guess a split-second.”

Valiente played the sixth chukker like its life depended on it. Rob Jornayvaz, who returned to the lineup for the final match about being out of play for a couple weeks, tied the game at 13-all in the opening moments of the sixth. It looked like the game was headed into overtime, but a rocket of a penalty shot by Arellano ended the conversation, with Coca-Cola winning by one point.

The final of the Haas Cup took off at a running start with Inaki LaPrida tapping the ball in on a center hit, passing to Gonzalo Deltour, who drove it in for the first goal of the game. Tommy Collingwood tied the score with a lofted shot. A penalty one was awarded to Palm Beach Illustrated, giving them the lead 2-1.

The second chukker started with wide-open play that thrilled spectators. A penalty one was awarded to Tonkawa, tying it up again in a battle that continued throughout the game. Collingwood ran the ball in to put one up on the board for Palm Beach Illustrated. Michel Dorignac shot a strong pass to Obregon, who scored, ending the second chukker 4-2.

LaPrida and Deltour continued their strong teamwork, with LaPrida again setting up Deltour for a goal. A penalty one was then awarded on the next play, tying the score at 4-4. Another penalty one was awarded in the following play, giving Tonkawa the lead. Obregon converted a penalty, yet again tying the game 5-5. Obregon, who entered the Haas Cup as the third ranked player in penalty conversions, made another penalty conversion to end the half 6-5 in favor of Palm Beach Illustrated.

The start of the fourth chukker had Deltour taking a turn at the penalty line. Deltour converted to close the gap 6-6. In the following play, Deltour shot a pass to LaPrida, who scored. Jeff Hildebrand ran the ball in for a goal, extending Tonkawa’s lead 8-6. However, Obregon quickly converted multiple penalty shots to tie it up 8-8 at the end of the fourth chukker.

Then, Obregon ran the ball to goal reclaiming the lead for Palm Beach Illustrated. After several minutes of play, Deltour made a penalty conversion to put one up on the board for Tonkawa. In an impressive display of teamwork, Zenni took off on a breakaway, only to have Deltour back the ball out at the last second. Obregon was right there for his teammate, tapping the ball in for a goal.

Deltour converted for a goal, tying the score 10-10. Dorignac responded by hitting a pass to Zenni, who drove it in for Palm Beach Illustrated to once again, assume the lead 11-10 at the end of the fifth chukker. Deltour rallied to make the score 11-11, yet Collingwood scored the final goal of the match to clinch the win for Palm Beach Illustrated.

Patron Zenni was very pleased with his team’s performance. “As a team, I think we worked really well together,” said Zenni. “Our team motto is ‘try to hit it forward and then someone will always try to pick it up’. I think we accomplished our objective.”

Obregon was also happy with his team’s performance against a tough opponent. “It was a very, very tough match,” said Obregon. “Tonkawa’s a good team. But… Jared [Zenni] plays really well, and Michel [Dorignac] and Tommy [Collingwood] – they all play great. It’s a good team.”

The season continues with the semifinals of the C. V. Whitney Cup on Wednesday, February 25 with Audi/Millarville playing Alegria at noon and Valiente taking on Orchard Hill at 3 p.m. at the International Polo Club Palm Beach.