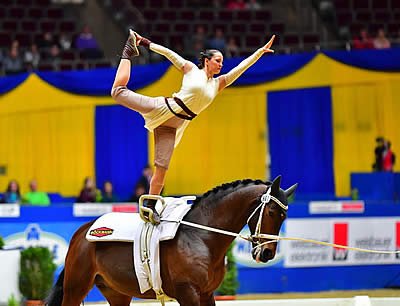 The home crowd at the Signal Iduna Cup in Dortmund (GER) was delighted as the national anthem rang out three times at the FEI World Cup™ Vaulting Final as the German contingent produced a clean sweep of victories.

The series then came to an electrifying conclusion as Jannis Drewell fought off tough competition to be crowned FEI World Cup™ Vaulting male champion for a second year in a row.

Drawing on her wealth of competition experience and her amazing ability to rise to the occasion under extreme pressure, Kristina Boe performed two outstanding rounds of her Rey from Star Wars freestyle to take the title (8.791 points). Teaming up with her long time team of Don de la Mar and Winnie Schlüter on the lunge, Kristina punched the air as she realised she had done enough to become FEI World Cup™ Vaulting champion.

Kristina had to come from behind after the first round, sitting overnight on 8.745 points to Switzerland’s Nadja Büttiker’s 8.821. The Büttiker v Boe rivalry, which has seen the two athletes go back and forth at the top of the leaderboard, has captivated fans of this year’s FEI World Cup™ Vaulting.

Büttiker’s first round freestyle was a masterclass in perfection.  However, in an otherwise foot perfect second round, during a difficult sideways stand on the croup of the horse Nadja lost balance and fell from Keep Cool III. Whilst the fall took her out of title contention, her otherwise flawless execution secured her second place (8.558).

The German flag was raised for a second time as Theresa-Sophie Bresch and Torben Jacobs secured their first Pas-de-Deux title together in a display of sheer domination. They wowed with their emotive Bonnie and Clyde routine, which saw them accomplish daring lifts linked together with intricate transitions and unparalleled choreography. Together with Holiday on Ice and lunger Alexandra Knauf their title hopes never seemed in doubt – they led the competition from beginning to end (8.337).

The young Swiss pairing of Syra Schmid & Zoe Maruccio secured second, once again highlighting their vast improvement this season (7.820), whilst Marina Mohar and Celine Hoffstetter (SUI) rounded off the podium in 3rd with an assured, creative performance (7.327).

After suffering a tough first round freestyle, Jolina Ossenberg-Engels and Timo Gerdes (GER) bounced back to finish 4th with a second round score of 8.035, finishing on a total of 6.884.

Going in to the final day, could Germany make it three for three?

The FEI World Cup™ Vaulting Final concluded with the male competition. Last year’s champion Jannis Drewell returned to defend his title. On arrival his hopes were put in jeopardy as long term partner Diabolus was not fit to compete. Luckily Viktor Brüsewitz and lunger Gesa Bührig offered up Claus 51 to keep the World Cup dream alive.

France versus Germany, the competition came down to a head to head between Clement Taillez (FRA) and Jannis Drewell (GER). With both competitors sitting on an 8.7 after the first round freestyle, and Drewell in the overnight lead, the competition was on!

Clement performed a brilliant rendition of his ‘Dance’ freestyle to end on a combined total of 8.723. The pressure was well and truly on for last to go Drewell. After only going on Claus 51 for the first time two days ago, and having to adapt with the wrong surcingle, he rose to the occasion. Drewell performed his Pirates of the Caribbean routine with confidence and attacked to score 8.797 – thus retaining his FEI World Cup™ Vaulting title. His achievement was aided by the excellent last minute partnership with lunger Gesa Bührig and Claus, who achieved a brilliant horse score.

Jannik Heiland (GER) occupied third place, matching his 2017 result with a harmonious, elegant freestyle (8.570) with Viktor Brusweitz in 4th by a whisker on 8.561. Testament to the exceptional standard, 5th place Lukas Heppler (SUI) finished on an 8.517, which at any other competition could have been enough to win the event, whilst Hungary’s Balazs Bence overcame some first day horse difficulties to finish 6th (6.237).