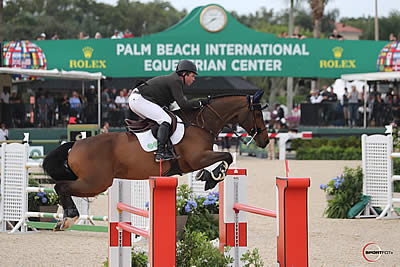 From a 46-horse field, 17 advanced to the jump-off of the Rosenbaum PLLC Grand Prix set by course designer Eric Hasbrouck (USA). Returning sixth, O’Connor and 11-year-old Italian Sporthorse gelding Lazzaro Delle Schiave gave it all they had, stopping the clock in a time of 35.956 seconds. The time would eventually take the victory by less than a half a second over runner-up Molly Ashe Cawley riding Balous Day Date, owned by Louisburg Farm, to a time of 36.455 seconds.

“We went early and I knew there were some fast ones and good ones behind me, so I took out a few strides, particularly to the last, and really used my horse’s strength there,” said O’Connor, who has settled in Wellington for the duration of the season with his three top horses. “The course was fast and a nice test for the rest of the circuit.”

WEF hunter competition came to a close during week 1 with Lilly Goldstein and Fenway earning champion in the Small Junior Hunters 15 & Under. Goldstein hails from Argyle, TX and rode her horse Fenway to two firsts, two thirds, and a sixth-place ribbon to earn the tri-color.

Fenway is owned by Goldstein, and proved himself to the judges by winning the hack and staying consistent throughout both days of the division. “The judges really liked him! He jumped very nice and was super smooth during our rounds,” Goldstein said of her horse’s performance.