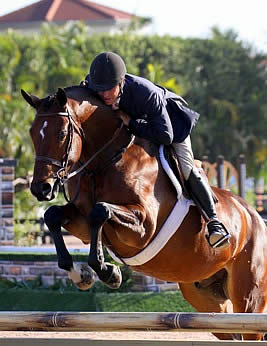 Rainy weather that persisted throughout the week didn’t deter the pair as they bested the field in two out of the three over fences classes and then picked up the win in the under saddle class to clinch the division championship.

Susan Moriconi purchased the four-year-old Oldenburg gelding a little over two weeks ago with plans to continue him in the 3 & 4-Year-Old Hunters throughout the remainder of the season, and hopefully secure the circuit championship award for the division.

The championship this week added to a solid campaign for that honor. Prior to being purchased by Moriconi, Lucas had already topped the division during weeks two and three with Holly Orlando in the saddle. Payne has taken over the ride seamlessly, and the team is looking forward to the rest of WEF and beyond.

“When you’re buying a young horse you never know for sure what you’re going to get, but he’s been great right out of the box,” trainer David Belford said. “He’s very charismatic. He’s a refined young horse.”

After finishing out the circuit in the 3 & 4-Year-Old Hunters, Payne and Belford hope to move Lucas up to the Pre-Greens later this year and then on to the First Year Green Hunters division next year.

Adding to New Hope LLC and Payne’s success this week was Good Call, owned by Le Reve Farm, Inc. Payne and Good Call led the Performance Hunter 3’3″ division with two first places, including a top score of 92 in the handy class, before scratching due to torrential rain.

The team at New Hope LLC is prepared to take the reins for the World Champion Hunter Rider Week. With the new addition of Lucas, as well as their already impressive string of top hunter mounts, WEF VII is sure to be full of heavy hunter action.

Belford and Payne of New Hope LLC have trained some of the country’s top show hunters and are continuously adding numerous accolades to their already impressive record. The team has consistently earned championships at the nation’s top horse show, and their inspiring program has helped transform horses, as well as develop some of the sport’s top riders and trainers. For more information, please contact paynecl@hotmail.com.