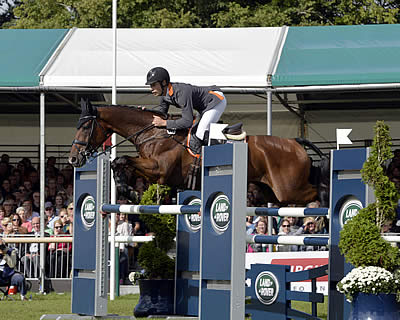 Lausanne (SUI), September 4 2016 – Christopher Burton (AUS), one of the most talented riders to hit the Eventing circuit in the last few years, emerged victorious on Nobilis 18 at the Land Rover Burghley Horse Trials (GBR), final leg of the FEI Classics™ 2015/2016, even if he did live a little dangerously in the closing stages of the competition.

Such was Burton’s supremacy after the first two phases that he entered the Jumping arena with four fences in hand, but he did manage to hit four – if he’d had another he would have handed a sixth Burghley victory to the invincible Andrew Nicholson (NZL), who rose a place to be second on Nereo with just one down and a couple of time penalties.

Jonelle Price (NZL) scored her best CCI4* result this year, third on Classic Moet with just four faults, and her husband, Tim, who had taken the pressure off Burton with his three fences down on Ringwood Sky Boy, ended up in fourth place.

“I tried to keep it interesting for you all,” said Burton wryly. “Nobilis is usually a careful jumper, but he felt a bit tired and the ground was perhaps a little dead, but that’s three-day eventing for you.

“Never in my wildest dreams did it occur to me that I would win Burghley. I’d walked past all the plaques on Winners’ Avenue – all these old boys with their names on them! – and thought it would be nice to have my name there too.”

Andrew Nicholson may not quite count as an “old boy”, but he is 21 years older than Burton and he admits that he is not back to full strength after breaking his neck 12 months ago. “You don’t know how special this is,” he told the television cameras.

And it was particularly appropriate that this result should come on Libby Sellar’s 16-year-old Nereo, three-times a runner-up at Burghley, a winner of World and Olympic medals and a one-man horse with which the Kiwi genius has particular affinity.

Jonelle Price, who scored her best ever Burghley result, admitted that she was disappointed with her Dressage mark, which left her in 22nd place. “I feel as if I’ve been digging myself out of a hole from the start, first after the Dressage and then when I got time penalties with the wrong line at the Dairy Farm on the Cross Country. But now, of course, I’m delighted.”

Andrew Nicholson was also pleasantly surprised to find himself the recipient of 20,000 USD for leaping into third place in the FEI Classics™ 2015/2016, an astonishing achievement considering he has only competed at two CCI4* events this season – he was fifth at Luhmühlen in June.

No one was ever going to catch Michael Jung (GER), the runaway winner of the 40,000 USD FEI Classics™ 2015/2016 first prize with victories at Kentucky and Badminton plus a second place at Pau last year, but Tim Price, who was third at Pau and fourth at Luhmühlen as well, managed to hold onto second place and he takes home a cool 30,000 USD.

It has been an FEI Classics™ season of great thrills and stories, but one man has stolen the show and set the standard: the unmatchable Michael Jung.

Christopher Burton, 34, is the current world number two. He has won Adelaide CCI4* twice, in 2008 on Newsprint and in 2013 on the catch ride TS Jamaimo, but he really sprang into the public consciousness with a brilliant trailblazing Cross Country ride at the London Olympic Games in 2012 where he finished 16th on Holstein Park Leilani.

Burton, who is married to fellow rider Rebekah, has been settled in Britain, in Surrey, for five years, notching up several good international placings including third and fourth places at Burghley last year on TS Jamaimo and Haruzac, and second place on Nobilis 18 at Blenheim CCI3*.

This year, he won the CCI3* at Saumur on Santano ll, his ride in the Rio Olympic Games where he led after the Cross Country phase and finished in eventual fifth place with a team bronze medal.

Michael Jung (GER), 34, has won an individual medal every year since 2009, six of them gold, and is the first rider in history to have held Olympic, World and European titles simultaneously.

Riding La Biosthetique Sam, he won the world title in Kentucky (USA) in 2010, double European gold in Luhmühlen in 2011 and double Olympic gold in London (GBR) in 2012 plus individual gold and team silver at the Rio Olympic Games (BRA) this year. He has won three European titles on three different horses: in 2011 on Sam, in 2013 on Halunke and in 2015 on FischerTakinou. He also won world team gold and individual silver medals on fisherRocana FST in 2014.

Jung, who lives at Horb, Germany, where his parents, Joachim and Bridgette, own a riding establishment, has also won Kentucky twice in succession on FischerRocana and in the last 12 months added victories at Burghley and Badminton on Sam to take the Rolex Grand Slam of Eventing. This is his first FEI Classics™ victory.