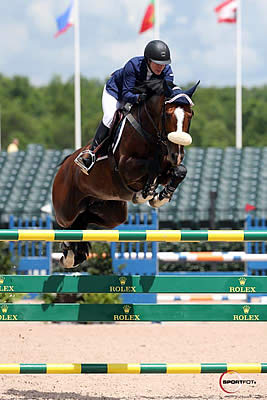 McCrea and Wannick WH were the last pair in the George H. Morris Stadium for the jump-off, riding in hot on the heels of Lucas Porter and Doma Sue, who had just put in the fastest clear round of the jump-off. McCrea had scoped out the tracks she believed would save her time on course and made two bold inside turns to ultimately finish three seconds faster than Porter.

“Winning here in Tryon feels great. It’s our first time here and I was so impressed with how everything went this week. I thought this class would be great for him so we went today and got really lucky,” said McCrea.

The duo has built a solid partnership together as Wannick WH has been with the McCreas for nearly seven years. McCrea knows the ins-and-outs of the stallion’s style and the win today served as a great moment for the pair.

“We’ve had him forever. We bought him when he was five-and-a-half and now he’s twelve. It’s like putting on an old sneaker, you just know. I can feel really secure about what I think is going to happen and hopefully it does happen,” she commented. “He’s just a really good horse and he really tries. He’s a bit on the smaller side and for him to jump these big jumps is really cool. He gives you a great feeling.”

Abrahamson and Porter were the first two riders to finish with clear rounds in the jump-off and McCrea knew she was going to have to ride competitively to keep all of the rails up and lay down a fast and efficient ride.

“The kids really put the pressure on this old lady today,” laughed McCrea. “To be honest, I wasn’t sure that I wanted to go inside to the double because it was quite short but I said to myself, ‘Okay, we’re going inside of the double and if you clear that then you have to make an effort to get inside of the next two standards,'” she explained. “I sort of forced that turn but he slowed down and that allowed me to turn him quite tight and I got a great line. It really worked out to my advantage. It almost gave him enough of a half halt to rock back on his hocks, which pushed us through the next fence.

Christine and her husband Jonathan will stay at TIEC to contest the next week of FEI CSI 4* competition before returning to Connecticut for small summer break. The duo has a strong string of horses here and will look to continue their winning ways moving into Tryon Spring 8 next week.

“We’ll be here for next week and then we’ll head back to Connecticut for a bit. I haven’t been home since December so I’m really looking forward to spending some time there. We’ll do some of the more local stuff there, but will 100% be coming back here within the year. We’ve already put it on the schedule,” commented McCrea. “We love it here and I think what Mark [Bellissimo] is doing with the FEI classes, for me as a rider, is what I want and it’s what we’ve all been begging for. We’re so thrilled to be here and to win this class was just great.”

Adding TIEC into their show schedule has been a huge advantage for McCrea, as she can not only compete in FEI sanctioned competitions on U.S. soil, something she has been looking forward to for a long time, but also gives her the opportunity to choose from a wide range of classes and decide which are most fitting for her horses.

“I think the footing has been perfect. It has a give and it feels soft but firm. You can turn in it without slipping. The layout of the facility is really cool and I like the way it’s starting to layout,” said McCrea. I realize there’s a lot more work to do, but I can say that if it was just this alone, it’s amazing, but I think moving forward with the plans is just going to make it that much better and we’re really excited for that.”

Lucas Porter has been a force at Tryon International Equestrian Center this week, collecting several top finishes in both the jumper and equitation rings. Finishing his first week of competition at TIEC, Porter collected second place in the $25,000 Tryon Grand Prix after winning the ASPCA Medal Maclay earlier in the day. Porter rode Sleepy P Ranch, LLC’s Punch to victory in the Maclay and piloted Sleepy P Ranch’s Doma Sue to a second place finish in the Grand Prix.

“I got Doma Sue from David Blake last August and I competed her in the High Junior classes in Wellington and just started making the move to Grand Prix in the past few months. This is my first really great result on her at this level so I’m really pleased with how it went,” commented Porter. “I thought the course was great for the number of starters and I thought there were a perfect amount of clears and I was fortunate to come towards the end in the jump-off. I wanted to put in a really tidy clear and she did.”

Porter and his equitation mount Punch gathered wins in the ASPCA Maclay and the USEF Pessoa Hunt Seat Medal during Tryon Week 7. Punch has been an important horse in Porter’s young career, as he has helped him to better his position and give him experience in the equitation and hunter rings.

“He’s really a hybrid. He used to be a jumper and then my trainer and I thought that we needed to work on my position so he started to do some of the equitation and he’s turned out to be a perfect horse for it,” said Porter. “He’s slow tempered and he has a big stride, which has made him ideal in those classes.”

When Porter is competing, it is all hands on deck to ensure that he gets to each of his rings on-time, as he has a number of horses entered in classes throughout the grounds. Today was no different, as he hopped off of his ride in the Junior/Amateur Owner Medium Classic and headed straight to the equitation ring for the ASPCA Maclay and the USEF Pessoa Hunt Seat Medal.

“I rode the Maclay first and was able to use that to an advantage in the USEF Pessoa Hunt Seat Medal because I already knew the lines and the striding in between the jumps and I tried to do the same thing in both,” he commented. “He was perfect just like Doma and everything worked out perfectly today, in the Grand Prix and in both of those classes.”

The Porters and the Sleepy P Ranch team will continue competing at TIEC through Tryon Spring 8 of the Spring Series and have been thoroughly impressed with the facility and competition.

“The facility here is unbelievable. The rings are huge and the barns are incredibly nice. I personally like the ample schooling rings, which allows you school your horses in a calm place if you want to get away from the rest of the show,” commented Porter. “The weather here is perfect and we’ve all been really happy. I want to thank the Bellissimos for putting on this show and the sponsors for supporting these classes and to my sponsors for helping me get to where I am.”

Tryon Spring 8 CSI 4* will begin on Wednesday, June 3, and will continue through Sunday, June 7. Tryon Spring 8 will be the biggest week of the Tryon Spring Series, hosting FEI CSI 4* competition alongside an array of activities for the general public to enjoy at the venue including the Festival of the Carolinas Craft Beer Festival, the unveiling of the Rolex Clock Tower and much more on Saturday, June 6. For more information on the competition and the events to come at TIEC, please visit www.tryon.com. Please “Like” the TIEC Facebook page at www.facebook.com/tryonresort to be eligible for various contests and promotions.