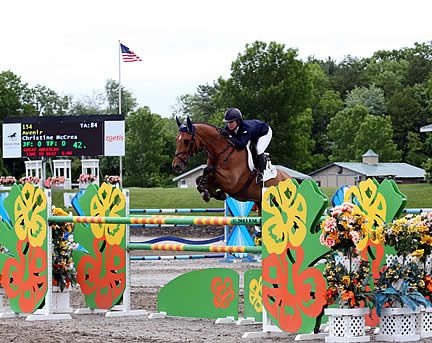 ©ESI Photography. Christine McCrea and Avenir jump their way to a blue in the $25,000 SmartPak Grand Prix.

McCrea of East Windsor, Connecticut rode sixth in the first-round order and posted the second clear round after Peter Wylde of Wellington, Florida was first to leave the rails up on Lewin 5, owned by Societe Cirile de Necurie de Meautry. Eight others joined them for a 10-horse jump-off, which left McCrea as one of only two double clear rounds.

With the north berm of the grand prix stadium now boasting a new and improved VIP Club, exhibitors and spectators alike gathered to watch Marina Azevedo of Campinas, Brazil test both horse and rider. She built a 13-obstacle course with 16 jumping efforts, including a double early in the course at fence three and a triple combination at fence 12.

While fair for $25,000, McCrea noted that Azevedo offered some challenges, including tricky striding between fences seven and eight, and technical combinations. “I had a pretty fair plan when I entered the ring – I really slowed up coming into the triple (a vertical, vertical, oxer), got Avenir under control, balanced and it worked out great in the end,” she said.

Avenir, a 12-year-old Belgian-bred gelding, has been under the direction of McCrea for about three years and, according to her, is a horse that knows his job. “He is such a fighter,” she said. “He knows that the game is to go fast and clear, so as long as I ride him well he is always right there for me. He is in it to win it.”

McCrea returned second in the jump-off and set an early Great American Time to Beat at 34.95 seconds. Jonathan Corrigan of Oyster Bay, New York was quick to challenge in the next trip on Sagamore Farm’s Olympic De Chamant. They were clear, but couldn’t catch McCrea and Avenir. They posted a time of 35.92 seconds to settle for second.

Kevin Babington of Keene, Kentucky was the fastest of the four-faulters and rode Mark Q to third. Laura Chapot of Neshanic Station, New Jersey picked up four faults with Quointreau Un Prince, owned by Chapot and McLain Ward, and finished fourth. Heather Caristo-Williams of Saugerties, New York rounded out the top five with a single rail aboard Mr. & Mrs. Ralph Caristo’s Evening Star.

With Friday’s win under her belt, McCrea admits that she and her husband Jonathan have their sights firmly set on appearances in the fourth-annual Zoetis $1 Million Grand Prix. “That’s a highlight of our calendar,” she said. “We have the horses and have set our goals. Now we just have to qualify.”

$10,000 Brook Ledge Open Welcome
Todd Minikus of Loxahatchee, Florida got things started on Wednesday in the $10,000 Brook Ledge Open Welcome. He rode his own Quality Girl to the top and cashed a $2,800 check. Laura Chapot dominated the top three with a second-place ride in the irons of Mary Chapot’s Umberto and was third with Mary Chapot’s Shooting Star.

Peter Wylde was fourth aboard Lewin 5, and Far Hills, New Jersey’s Ronan McGuigan capped the top five on his own Capall Zidane.

Brook Ledge Horse Transportation presents weekly jumper classes at HITS Saugerties. Aside from the winner’s purse, Brook Ledge Open Jumper riders also compete for the Brook Ledge Rider Bonus. The award, given at the conclusion of the circuit, includes a $1,500 shipping credit for the rider who accumulates the most points in those classes throughout the HITS Saugerties circuit.

Coming Up at HITS-on-the-Hudson
Grand prix competition continues Sunday at HITS-on-the-Hudson with the $50,000 EMO Grand Prix, presented by Zoetis, and commences qualifying crunch time for September’s Zoetis $1 Million Grand Prix. The first seven weeks of the HITS Saugerties circuit will feature two weekly qualifying opportunities with one final Wild Card class the Friday before the Zoetis Million. Follow all the qualifying action at HitsShows.com.