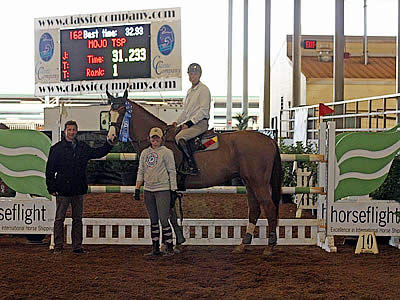 Christian Rogge of Spring, Texas in the irons of his own Mojo TSP rode away with the blue after posting double clear rounds in times of 83.164 seconds and 31.233 seconds.  “I am the owner, rider and breeder of this horse.  I bred him myself and owned him since then and brought him along through the rankings.  Last weekend he did his first Grand Prix and had two rails in the jump off and got sixth. Yesterday he was really cool and understood the jump off better and took the class,” commented Rogge.

First to go, Shannon Hicks and Helen Gilbert’s C’Havinia posted a clear first round effort in a time of 82.252, within the 91 seconds time allowed. Their second round in a time of 32.818 seconds was well within the time allowed of 44 seconds, but four jump faults would find them finishing in third place overall.

Marylisa Leffler of Brookville, Maryland and Rolling Acres’ Bling Bling followed in the order, but four faults in their first round in a time of 78.781 seconds had them finish in eighth place overall.

Rogge had his first ride in the class, GK Performance Horses’ Kahlua, and turned in a clear first round in a time of 87.578 seconds. Their second round in a time of 32.547 seconds resulted in eight jump faults and they would settle into eighth place overall.

Rogge’s wife, Hailey Rogge of Lafayette, Louisiana, followed in the order in the irons of her own Zine Dine. The pair turned in a clear first round in a time of 80.975 seconds and a four fault second round in a time of 33.368 seconds which would see them finish in fifth place overall.

Leffler and Rolling Acres’ Carlot followed in the order and were the first horse and rider to turn in double clear rounds in times of 80.432 and 32.930 seconds, setting the new time to beat.

The lead was short lived when Christian Rogge and his second ride, his own Mojo TSP, turned in double clear rounds setting the new time to beat at 31.233 seconds.  “Marylisa [Leffler] has some really nice, experienced horses and mine are really young. I was really proud that my horse won and did really well against such seasoned grand prix horses,” commented Rogge.

Hailey Rogge and Andrew Kocher’s Tresor Platiere followed and turned in a four fault first round in a time of 80.55 seconds which earned them a ninth place finish.

Hicks was last to go in the class on Helen Gilbert’s Al Pachini. Although the pair turned in a clear first round in a time of 80.790 seconds, their second round in a time of 33.146 seconds earned eight jump faults and the pair would settle for a seventh place finish overall.

Rogge said, “I want to thank Bob [Bell] for continuing to produce these Pensacola shows.  We love coming here so early in the season so we can develop our horses.”  Rogge continued, “We also love the experienced Classic crew, the office, the in gate, the VIP and all that Allen [Rheinheimer] and Janet [McCarroll] do here to make it such a positive experience for us year after year.  It’s such a nice atmosphere and we really appreciate all the Classic Company does to make this such a great show for us,” he added.