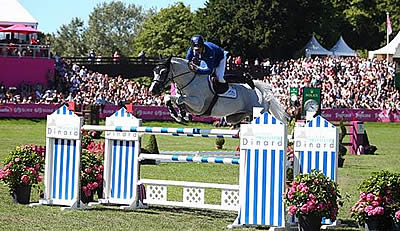 Out of 37 contestants in the Grand Prix CSI5* of the city of Dinard 2016, 15 managed to qualify for the jump off, but the German Christian Ahlmann, up to his reputation, clinches victory with Cornado II.

The jump off, very competitive, took place in front of fully packed grandstands and overexcited spectators. Since the design of the course did not allow the riders to cut short, the only solution to bring the time down was to turn immediately after landing from the fences. Second to go, the Belgian Jérôme Guéry chose to ask everything to his grey horse Papillon Z, and set the time at 42″73. Nobody could imagine this incredible performance could ever been beaten, but the German genius Christian Ahlmann, world n°2, associated to Cornado II, brings the time down to 42″72, by one hundred of a second, that will allow him to win this CSI5* of Dinard for his first visit and participation. “First of all, I have to admit that I am really impressed by the quality of the site and by the arena. To clear here, you need a very good and experienced horse, but the course was fun to ride. The fact that the public is so big makes a real difference although it puts more pressure on our shoulders.”

The Belgian rider had to do with the second place. “I miss this victory by a fraction of a second, but I am very pleased with this placing. I am very happy to be part of this competition with so many talented riders.”

The Irish Darragh Kenny, in great spirits since the beginning of the Jumping of Dinard, places 3rd, after clearing the course with Go Easy de Muze in a time of 43″25.”This show is fantastic; it is my second time here; my horse jumped incredible. I only had him for eight weeks; he already places 3rd twice in CSI5*.”

The first French, Timothée Anciaume, decided not to play the time, but to clear. His strategy was obviously right, since, associated to Kiamon, he places 6th behind the Belgian Peter Devos/Dream of India Greenfield (4th) and the Swedish Douglas Lindelow/Zacramento (5th).

Results of the Grand Prix of Dinard:
www.worldsporttiming.com/results/jumping-international-de-dinard-2016-107/grand-prix-de-la-ville-de-dinard-6/results.html

Link to download the free highlights of the Grand Prix of Dinard:
http://transfert.datanaute.com/download-742de1a6e3fd0a23577c02576c4de8fd