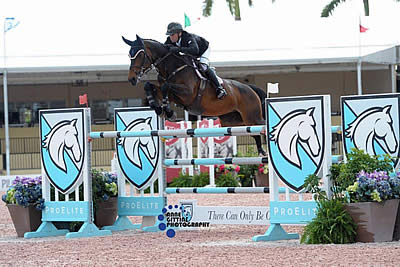 The class saw 28 entries contest the Philip Devita designed track with 11 entries posting a clear effort in the first round to move forward to the jump-off. Ewanouski narrowly edged out Tisbo for the win, but Binja jumped efficiently in the second round to secure their win.

“I felt great after the class. You always feel good after a result like that. The course was really well done for the Grand Prix and Philip did a great job. It worked well for Binja, especially the jump-off,” commented Ewanouski. “She’s normally very fast in the jump-off and I could make a few tight turns. She has a huge stride and there was a long run to the last jump in the jump-off and I made a really neat turn and just galloped as fast as I could at the last fence. It caught her attention just enough, but she’s that fast anyway and the jump-off worked in our favor.

“We’ve had her for about two years. She’s owned by Castle Point Farm, who is a client of ours, Lindsay Strauffus. She showed her in the amateurs a bit last year and I started showing her over the summer. We did some good classes in Kentucky throughout the summer season,” he elaborated on the mare’s performance this past year.

Ewanouski and Binja have produced impressive results together since he took over the ride, but ensured the mare was well-rested and feeling sharp for the ESP Spring Series, which their team felt better suited the mare.

“We laid low during season a little bit and FEI is so competitive. She’s brave and very scopey and is super fun for me to show. We wanted to set her up for success this season, so we decided to have an easy WEF. She showed in some of the national classes with good results at the end of season. We were planning on gearing up for this circuit, which suits her really well. She’s really fresh and not tired and that worked in our favor. She came into last week’s show just a bit fresher than the others I think,” he explained.

As for the future of the pair, Binja is for sale, but Ewanouski will continue to compete her throughout the spring and summer until she’s partnered with a new rider. The duo will look towards an FEI start in May if she is still part of the program, as the owners enjoy watching Ewanouski compete her.

“She is for sale, but I don’t think that we’re in a huge rush. The owners love being able to watch her show and produce good results. She’ll come to KY with us in the spring and potentially do the FEI 2* at Split Rock and we’ll go from there. We base mostly in KY for the summer and do some shows in that area and she’ll go if we still have her at that point. We’d like to end on a high note here and we’re walking away from this win with her feeling really fresh and happy.”

For full results from the $35,000 ProElite Spring I Grand Prix, click here.